On October 22, 2010 President Barack Obama issued a formal message to young girls and boys to “be true to” themselves by adopting the current lionized state of homosexism as “a source of pride, and a source of strength.” Having been young once himself, Mr. Obama knows that teenagers are by definition “immature” and remain so until roughly age 21 when their cognitive neuro anatomy catches up with their bodies. 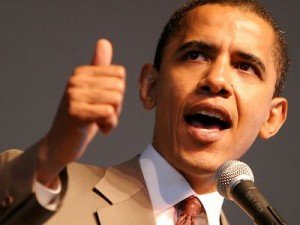 Why tell children to feel “pride” and “strength” in adopting an early death sentence when you are too immature to know much of anything? How cruel, how outrageously heartless!
Instead of urging vulnerable youths into premature sexual riddled with crippling disease and death, Mr. Obama should have pointed to the October 9, 1998 Washington Post full page advert by The Whitman-Walker Clinic.

For those new to homosexual trauma, the WWC was one of the earliest facilities dedicated to medically serve homosexist consequences.

The WWC inadvertently confirmed homosexist sodomy as a death wish. Asking, “Are you a man who has sex with men?” the clinic warned, “If so, you should know that 1 in 5 of your prospective partners could be infected with the virus that causes AIDS.”
Translation? The data find roughly one in five homosexist males are an HIV or if you prefer, AIDS vector.

Depending on the data you prefer, the average homosexual male has between 50 and 150 sex partners and many die before age 20. Mr. Obama told these confused boys and girls to “reach out to people you trust,” who would tell the child s/he is “gay.” Obama’s charge that teen homosexism as “a source of pride, and a source of strength,” is contraindicated by medial facts – a very short lived period of “pride” or “strength.”

Statistically, youngsters who think themselves “gay” can expect to contract scores of STDs and to die young of AIDS. This is not “pride” but mass suicide based on how the human body responds to ongoing sodomy,

Obama’s cheerful “be proud” remarks were spurred on by nationwide Big name celebrities, media, and schools across the nation wore purple to express “Spirit Day.” solidarity for several tragic boys who, believing their homosexist label, committed suicide before their “one in five” Russian Roulette chances played out.

The hard data find the average number of homosexist paramours is between 100 and 1,000. That means the “1 in 5” sex beaus cited below is, candidly, a death sentence – murder by disease – of thousands of vulnerable, lonely and confused youths. 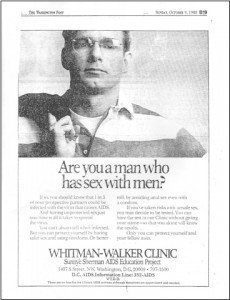 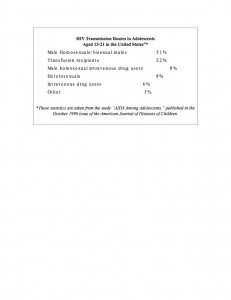 Homosexists tagged their requiem, “Spirit Day,” claiming youth kill themselves due to being bullied for being “gay.” However, based on my years of study, children are bullied daily by school teachers, sex ed teachers and the media to label themselves as “gay.”
The Gay, Lesbian, and Straight Education Network (GLSEN), The Gay & Lesbian Alliance Against Defamation (GLAAD), and other heterophobic agencies, harassed the wimpy American Psychiatric Association to normalize homosexism in 1973 and since then mass media elites have been in lock step on all homosexist demands, including for the current suicide labeling campaign.

*These statistics are taken from the study “AIDS Among Adolescents,” published in the October 1990 issue of the American Journal of Diseases of Children.

Anyone who really cares about children should demand to know, if 59 percent of AIDS adolescents say they were infected by bi/homosexual men, who prosecuted their killers? The Advocate March 24, 1992 reported in America’s Worst-Kept Secret: AIDS is Devastating the Nation’s Teenagers, and Gay Kids are Dying by the Thousands the shocking data reprinted verbatim below. Recall that AIDS typically manifests several years after infection. 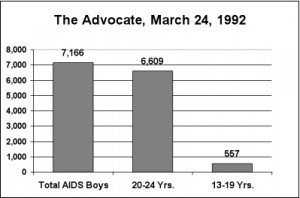 In our study, (Reisman & Johnson, Partner Solicitation Language as a Reflection of Male Sexual Orientation, 1995), by 1991 The Advocate cited CDC data identifying 7,166 boys and 1,537 girls (commonly infected by bi/homosexual boyfriends) dying of AIDS. I again ask, Why haven’t ten thousand or more homosexist males been arrested and convicted of mass boy murder?
We are looking at a “spirit” for sure, but whose?