Voice of America or Voice of Tehran

During the Ronald Reagan Administration, Voice of America (VOA), the nation’s international broadcast network, was used effectively to educate the Soviet people about the virtues of freedom. By all accounts, it played a huge roll in bringing down the Soviet empire from within, and providing freedom to its people, which had been enslaved by communism. 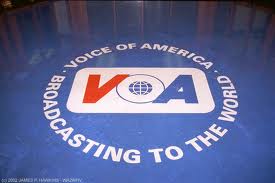 Now another despotic regime, even more evil than the Soviets, threatens not only its people, but the entire world. This is the radical Islamic regime in Iran, run by fanatical mullahs who are bent on the destruction of the Persian people, as well as Christians and Jews worldwide. These mullahs are perpetrating a modern day Holocaust, imprisoning, raping, torturing, and murdering anyone who dare complain about their brand of extreme Islam, or women’s or other human rights.

One would have thought that the United States would utilize VOA to broadcast a strong message of freedom into Iran, such that it would energize the Persian people to rise up and overthrow the regime, much like occurred in the Soviet Union. However, VOA’s Persian News Network, the arm that broadcasts into Iran, has been worse than emasculated; it is being managed by the son of a mullah, whose father is an adviser to Ayatollah Khamenei, and whose brother works for the Iranian government as well. This manager is named Ali Sajjadi, and under his control, PNN has been broadcasting anti-American and pro-regime propaganda, so much so that Persians now see VOA as the “Islamic News Network.”

Freedom Watch and others have tried to help American politicians clean up VOA, but to no avail. Now, as the Iranian freedom movement needs our support more than ever, we must show these politicians that they need to take action to restore VOA as the voice of freedom.

Please join us in protest to restore VOA to greatness: to have Ali Sajjadi removed and replaced with a manager who will further Persian freedom and create stability for world peace. Time is short as the inaction of the American government and the west has allowed the Islamic Republic to all but crush the Iranian freedom fighters.

For more information and details about how to participate in this protest contact Velma Anne Ruth, Freedom Watch, (202) 506-4377. Larry Klayman, Esq. is the founder of Freedom Watch.

Larry Klayman is a former Justice Department prosecutor and the founder of Judicial Watch and Freedom Watch. His latest book is “Whores: Why and How I Came to Fight the Establishment.”