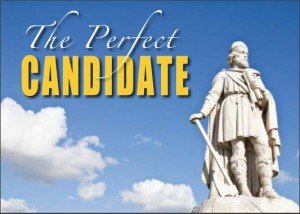 On the base of this King Alfred statue the following words are found:

Alfred found learning dead, and he restored it
Education neglected, and he revived it
The laws powerless, and he gave them force
The church debased, and he raised it
The land ravaged by a fearful enemy from which he delivered it
Alfred’s name will live as long as mankind shall respect the past

The great life lesson of G.K. Chesterton was that the “long ago and far away” may very well open our eyes to the “here and now” better than the events that swirl about us each day.

Alfred the Great was born in a time of great national distress, similar in many ways to America today. The foundations of everything stable seemed to be crumbling, the world literally falling apart. It appeared that there were no great men on the scene. Alfred became what a true Christian leader ought to be, what he should be in times of overwhelming difficulty.

For centuries after Christ, the biblical foundations of civilization had been birthed and developed by Celtic Christians. But by the 9th century, it seemed that England was destined to be destroyed by the marauding, blood-thirsty Viking armies. Even London fell to the invaders.

Alfred, the one independent king left in all of England came from a county called Wessex. He had been made head of his father’s army at the age of 17. In the coming years Alfred lost his father and older brothers in battle and was left alone to face the invaders. Alfred made a treaty of peace with the Vikings in 877 for the winter holidays. Vikings broke that treaty and attacked Alfred’s castle on Christmas night. In the chaos that ensued, most of the English were killed, but Alfred escaped with 200 of his men into a swampy marsh.

That winter, facing near starvation and the loss of all of England, Alfred had an epiphany, a real conversion to faith in Jesus Christ. The love of Christ inspired him to surrender his kingly pride. He repented and was imbued by the power of the Holy Spirit with a new, selfless courage. That spring, Alfred won a decisive victory against the Vikings. The future of the world was transformed that day, not only because brutal paganism was turned back, but because Alfred was then free to create a thoroughly Christian civilization and government.

Alfred was merciful in victory. He offered to let the Vikings stay in England if they would convert to Christianity. The Viking king and his leaders agreed. Alfred baptized them, trained them in the doctrines of the faith, and sent them back to rule in northern England. Alfred’s graciousness in victory was blessed of God. His descendants ruled England for over a century and confirmed that England would become a beacon of Christian faith.

He was bold in battle and fierce in defending his homeland. In order to continue defending his borders, he built regional fortifications, designed ships, created the English Navy, and fought in 54 hand to hand battles.

King Alfred was the embodiment of Christian chivalry and knighthood. He protected his nation, the innocent and cherished one woman forever. He married a nobleman’s daughter and loved her and their children throughout his life. Until Alfred, marital fidelity was virtually unheard of among rulers. During his reign, the English boasted that “a beautiful woman could walk from one side of their Island to the other with a basket of gold on her head and her babe in her arms and never fear.”

Alfred spent eight hours a day humbly ruling England. In addition, Alfred spent eight hours a day reading and writing. He translated large sections of Scripture and classic Christian works, like those of Augustine. He translated the Christian history of England by the Venerable Bede so that his people would know their nation’s heritage and understand how they had become a Christian nation. Alfred wrote, “My will was to live worthily as long as I lived; and, after my life, to leave to them who would come after me, my memory in good works.”

The Vikings had burned the libraries down, but Alfred set up schools so his people could understand God’s plan for their lives and for their nation. He showed his incredible devotion to education by giving one-half of his wealth to create Christian schools. He became the Father of English literature.

Alfred’s greatest accomplishment was the establishment of the Law of God as the Common Law of England. He enhanced and codified the common law tradition that was begun by earlier Christian kings. Alfred’s law code begins with his translation of the Ten Commandments – verbatim. He then includes other passages from the Law of Moses describing the clear application of the law to their society. It is followed by an excerpt from Christ’s Sermon of the Mount, and a brief account of apostolic history and the growth of Christian law among the Christian nations. This common law tradition is imbedded in and spoken of in our U.S. Constitution and stands in stark contrast to the tyrannical rulers’ law that, even today, dominates much of the world.

Alfred gave us the key for making this pattern of liberty work for us today. He knew that the strength of a nation was in the people at the local level. He said “Local government ought to be synonymous with local Christian virtue; otherwise it becomes local tyranny, local corruption, and local iniquity.” He developed local counties and towns based on the decentralization of power as taught by Moses. These local authorities were given more power than the national parliament. If our national leaders are out of control, it is a sure sign that we have failed in our local responsibilities in our counties, cities, and homes.

As we exercise the sacred responsibility of electing “civil ministers” or magistrates, we must choose representatives who share our Christian common law heritage, rather that that of the enslaving rulers’ law under the guise of a supposedly “caring, loving” state. If Alfred can build a Christian civilization surrounded by pagan enemies, certainly we can work to restore America, the most blessed and biblical civilization in the history of the world.