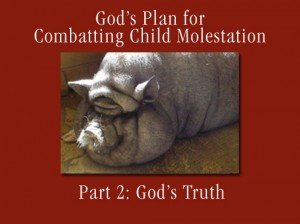 By David Outten
If you wish to effectively combat child molestation you need to know the truth.

The desire to molest children is not a disease, though there is chemical addiction involved. It’s not just an acquired habit, though it does involve habitual behavior.

Pedophilia is a form of slavery. Slaves have owners. Owners tell slaves what to do.

The behavior of a pedophile is not primarily hereditary or habitual. It is satanic. The driving force behind child molestation is a person who makes decisions under the command (or suggestion) of evil spirits.

If a child molester is caught, convicted and sentenced to time in prison they may lose access to children while incarcerated, but their desires will continue to be fed to them from the pits of hell until they’re set free from their slave owner.

The average American spends little time thinking about where their desires come from. Many see the opportunity to buy pornography as a form of freedom — the pursuit of happiness. They simply don’t see, or believe in, spirits. They think spiritual warfare is something fictional like you’d see a Harry Potter movie. This leaves them believing that every desire they have is something they came up with on their own.

A verse that I’ve found very helpful is, “A beautiful woman who lacks discretion is like a gold ring in a pig’s snout. (Proverbs 11:22)”

The man who is spiritually blind looks at a photograph of a beautiful naked woman and thinks, “Wow, she’s amazing.” What he doesn’t see is the spirit of lust, like a huge swine, dangling this immodest woman as bait.

Many a young man who sees his first Playboy magazine discovers the thrill of a jolt of testosterone. Such excitement can lead a young man to desire more and more excitement. Over time, looking at the same picture loses its thrill. The swine behind the excitement will suggest greater and greater “adventures.” The excitement hunter is sometimes led into child pornography and child molestation. The swine cares nothing for the feeling of others. It demands gratification regardless of who gets hurt.

Marriages disintegrate, families are shattered and children are molested, all in the quest for gratification. The swine laughs. He’s done his job to perfection without even being seen. His subject is left in ruins, unaware that he’s been lead all the way to destruction by a spirit he doesn’t even believe in.

That first dose of pornography is like a baited hook dropped in a lake to tempt a fish.

Even in churches you’ll find many men hooked on pornography. Sadly, some have stumbled so far they’re child molesters as well. That includes priests and pastors.

The 2005 movie THE GREAT RAID presented the true story of a daring WWII raid on a Japanese prison camp that freed many American and Filipino prisoners who were being brutalized.

God has a plan to rescue men and boys being driven like slave laborers by the swine of lust. In the gospel of Matthew Jesus asks his disciples, “Who do you say that I am?” Peter responded, “Thou are the Christ, the Son of the living God.” Jesus then declared, “Thou art Peter, and upon this rock I will build by church; and the gates of hell shall not prevail against it,”

The concept here is that the church is to see itself as an army out to storm the gates of hell and set free those held captive by Satan’s swine. The church should be attacking the swine of lust and rescuing men imprisoned by it — starting with churchgoers.

Many churchgoers will gladly say, “Jesus Christ is Lord,” but continue to live like slaves because they don’t obey their “Lord.” To be set free from the pull of Satanic desires you have to live as if Jesus has the authority to tell you what to do.

In the Gospel of John, Jesus said, “If you hold to my teaching, you are really my disciples. Then you will know the truth, and the truth will set you free. (John 8:31,32)” He went on to explain, “Everyone who sins is a slave to sin. Now a slave has no permanent place in the family, but a son belongs to it forever. So if the Son sets you free, you will be free indeed. (John 8:34-36)”

Jesus can set free those held captive to lust because he paid the price for their sin on the cross. Many church-going lust slaves believe Jesus paid the price for their sins, but they continue to live like slaves because they miss the “if” statement. Jesus said, “If you hold to my teachings.” In modern English that translates, “If you do what I tell you to do then you’re truly my followers and you’ll know the truth that sets you free.”

Returning to the cartoon imagery, if you listen to both the angel and the man in the red suit and then pick and choose which to obey at any moment, you’ll continue to look at pornography and feed your lust. You’ll then hear from the angel and feel dirty and disgusting. You get tossed around feeling like a hopeless loser. If however, the only voice you listen to is the angel, you’ll live in freedom. You go deaf to the demons of lust. That is truly making Jesus Lord of your life.

To live in the United States today is like being a fish swimming in a lake where you can’t go six inches without bumping into a hook baited with an immodest attractive woman. Images of beautiful scantily clad women are everywhere. Little girls are being brought up to think their goal in life should be to look as sexy as possible.

How is a man supposed to live free of lust in a culture where lures are so pervasive?

The answer is in the heart. If, in the core of your being, you desire freedom from lust you will see Satan’s lures for what they are, traps. Images of immodest women will repulse you because you see them as efforts by Satan to entice you. As commanded by Jesus Christ you will not go to pornographic websites or even stare at some advertisement, poster or billboard featuring a beautiful scantily clad woman. You’ll do your best to starve the lust you used to feed.

If, in the core of your being, you see yourself as an animal driven by sexual desires, you’ll be driven into lakes of pornography and oceans of desire. You’ll seek out more thrilling images and more thrilling experiences. You may dream of a purchasing a young sex slave or attracting an innocent little girl into the woods to satisfy your desires. To Satan’s delight, you may even live out such a dream.

Real freedom comes from living for Jesus Christ rather than living for Satan. The only way to live for Jesus Christ is to have the Holy Spirit (God) at the very center of what motivates your life. If your greatest desire in life is to please God, God will free you from lust. If you’re trying to play games with God and feed your lusts while attending church, you’ll continue to live in slavery to Satan.

Repentance, the decision to live for Jesus Christ rather than Satan, is a profound decision made at a particular time. Salvation, the rescue from Satan’s control, can take some time. In his letter to the Romans the Apostle Paul wrote: “Therefore, I urge you, brothers and sisters, in view of God’s mercy, to offer your bodies as a living sacrifice, holy and pleasing to God—this is your true and proper worship. Do not conform to the pattern of this world, but be transformed by the renewing of your mind. Then you will be able to test and approve what God’s will is—his good, pleasing and perfect will.”

The renewal of the mind involves abandoning the way ordinary people in the world think. There is a transformation, a renewal, involved. The faster the transformation, the sooner you experience salvation (rescue from Satan’s clutches).

Jerry Sandusky attended church, put scriptures on his garage door and molested children. Millions of “Christian” men look at pornography. This is not the evidence of a renewed mind. It is not salvation. These men are not experiencing the freedom God wants them to experience.

Hypocrisy turns many people away from organized religion but the greatest harm it does is to the hypocrites themselves. They may think, “I’m a believer. I just have some issues. God’s still workin’ on me.”

The man who’s content to try to serve both God and Satan is like a prisoner of war who can’t decide if he wants to leave with those sent to rescue him or to stay in his cell, eating slop, living with roaches and being beaten daily by his captors.

Once you’ve decided to make Jesus Lord of your life, you should want your mind renewed as quickly as possible.

Jesus has tremendous mercy on sinners who want to be rescued. He wept for them and died for them. He had a real problem with hypocrites. Those who professed belief in God but lived to feed their own power and prestige disgusted Him. These were the people who had him crucified.

Jesus came to set the captives free, not to provide a cover of social respectability for pornography addicts and child molesters. If you don’t really want freedom from lust don’t call Jesus Lord, sing hymns and claim to be Christian.

If you want to be rescued pursue the renewal of your mind with passion. The truth will set you free only when you apply it.

Part three of “God’s plan to combat child molestation” will be on “God’s justice.” If people reject God’s grace (part 1) and God’s truth (part 2) they WILL receive God’s justice (part 3).