TAPEWORM’S STATE OF THE LEGION ADDRESS

Editor’s note: In this column, David d’Escoto tips his hat to author C.S. Lewis and his “Screwtape Letters.”

My fellow demons, it brings me great pleasure to stand before you with such good news. After a long and arduous battle on many fronts in America, I am delighted to confirm that we are making great strides on the political and economic fronts. As gratifying as this is, nothing brings me more joy than to report the verifiable attrition and conversion to socialism of the next generation of America’s Christians.

Turn your attention to the big screen to view some of the inspiring results coming out of America. These reports clearly show our success in systematically destroying the worldview of children from Christian families. Remember, this is a key strategy in bringing down this “last and greatest bastion of freedom,” to quote that scoundrel Mr. Reagan.
I am literally salivating over all of the favorable reports coming out the United States. It was seven short years ago when we saw our first real evidence of attrition from the Southern Baptist Council on Family Life Report, which warned the church that “88 percent of the children raised in evangelical homes leave church at the age of 18.” Fearing it might be a fluke, we held our breath and hoped. Fortunately, the report was buried and never acted upon. A close call – it could have blown our cover.

Then the Barna Group reported in 2005 that “only 4 percent of U.S. teens can be considered evangelicals [and] the number is actually trending in the wrong direction,” and that “in 10 years, church attendance will be half the size it is today.” That was satisfying, but we needed more proof that everything was falling into place.
Proof arrived in one of the largest studies ever conducted. The National Study of Youth and Religion reported in 2006 that among teens the Christian faith is “degenerating into a pathetic version of itself” which is not even “remotely orthodox” and has been displaced by the new manmade religion of “Moralistic Therapeutic Deism.” More good news! Christian parents are settling for “nice kids” who are not even remotely grounded in the lies of the Enemy, Jesus Christ.

Victory is almost ours! Behold the Nehemiah Institute’s graph showing the result of a 20-year study on approximately 60,000 youth in 50 states from Christian, churchgoing families. What’s even yummier is the majority of them attend youth group. Please, defer your applause and observe how this clearly demonstrates a steady trend in a favorable direction. Oh, and to think that 85 percent of Christian parents send their children to public schools. A morsel to savor, is it not? Too good to be true, you say – yet study after study clearly show that after almost two centuries of hard work we have worn them down. The beauty of it is that the church is sound asleep on this issue. 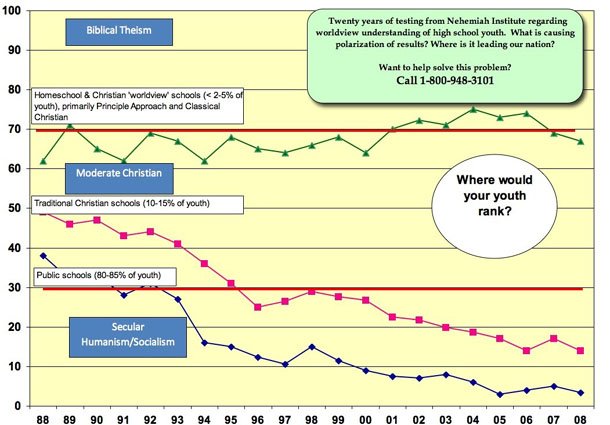 A well-respected demon, Screwtape, once shared his uncanny insight into how to deceive these people: “The safest road to hell is the gradual one – the gentle slope, soft underfoot, without sudden turnings, without milestones, without signposts.” We applied his insight at our round-table discussion on deception almost 200 years ago, and it is unfolding beautifully.

Now you know me for the humblest of individuals, but it is only stating fact to point out that my plan, voted upon some 180 years ago, has set this all into action. We know the despicable tendency of these Christians to lean heavily on our Enemy when times get tough. Hence the genius of my scheme: very slowly and quietly set the trap, let the Christians take the bait, and whap! We got them!

Our plan as originally outlined:

Step 1: Convince Christian parents to give their children over to the government for the majority of their training. Baby steps were required, so as not to alarm the majority of them – obviously they would not go for it all at once. We acquiesced on a few issues and let them have their lousy Bibles and pointless prayers. I insisted on your patience for several generations with Step 1, knowing that, after all, time and their sinful natures were on our side.

Step 2: With the parents pacified, addicted to their precious public schools and millions of their children in our grasp, strip the Bible and prayer from these places. We gambled that the Christian parents’ love for their local public school’s traditions, conveniences, sports programs, proms, homecomings, awards and tax-subsidized child care would far outweigh their children’s souls and overall well-being. As you know, the gamble paid off. We have hard evidence that only about 20 percent of Christian parents really care about their child’s soul anyhow.

Fellow demons, our Enemy has been heard to say that “pride comes before the fall,” and while we despise His words, to our rage He has never been proven wrong. We have come too far to make such a tragic mistake as to rest on our laurels or slacken our assault at this pivotal part of the battle. Remember, the church is asleep on the job and must stay asleep on this issue. Keep in mind that pesky rascal by the name of Spurgeon already warned the church about being asleep when he wrote, “In a slumbering church it is the adversary’s chief business to rock the cradle, hush all the noise. … Satan’s great dread is lest the church should be aroused from her dreamy slumbers.” So let them sleep, their pastors and leaders, their parents – let their churches and their ministries sleep. As we stand on the verge of victory, let the only words they hear from us be, “Shh, everything will be fine. Do not be aroused, shh.”

Allow them their teen rallies, their youth groups and children’s ministries, Christian music and rock concerts, megachurches and conferences, sermon series on better parenting, personal testimonies, best-selling Christian authors, national ministries and well-known leaders. Allow all that and more, for these are impotent in preventing the falling away of the next generation. The graph, as you can see, is still plummeting downward while they are busy about far less important things.

Let them feel good about trying to bring the Bible back into public schools – only as history, mind you; let them pat themselves on the back in their futile efforts at school reform; let them embrace the delusion that their child is the one true “salt and light” in their local public school; and let them most of all continue to believe that their local school is different and their child is immune. Yes, our Enemy may allow a handful of youth to slip through our hands, but we are interested in the bottom line. Let them have their few hundred and hold them up as examples to all the rest of the church – we will take our millions!

Remember, what we want – what we need – is their children. Let them argue among themselves. We will take the children in the meantime. Let pastors and leaders defend 12 years of a godless education as morally equivalent to a solidly biblical one. Just so they give us their children. Let them anxiously look for solutions in their political leaders and radio celebrities. Let the church continue to turn a blind eye to this tragedy and be more concerned about the environment, AIDS and winning elections than their own children. I will make this as simple as possible: We don’t care what they say or do as long as they feed us their children.

Our good socialist friend and now tormentee, Hitler, spoke eloquently of this strategy a mere 70 years ago, stating, “When an opponent declares, ‘I will not come over to your side,’ I calmly say, ‘Your child belongs to us already. … What are you? You will pass on. Your descendants, however, now stand in the new camp. In a short time they will know nothing else but this new community.’”

My fellow demons, we stand on the threshold of this new socialist community. I adjure you, do not awake the church from their deep sleep of denial. All is going according to plan.

Thank you all, and please do remember … shhh.

This article originally appeared at WND.com.