Red Tide 3: The Big Red Schoolhouse and the Communist Indoctrination of America 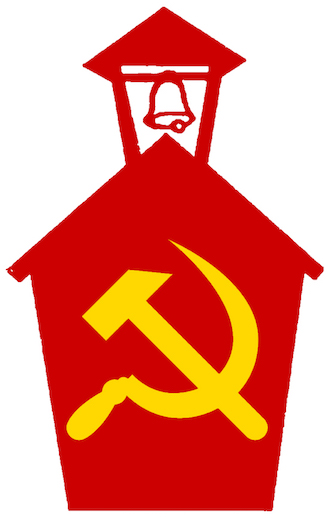 RED TIDE 3: The Big Red Schoolhouse and the Communist Indoctrination of America

Almost every day, from all over the United States, I see education stories from preschools, public and private elementary and secondary schools, and private and state-run colleges where many of these schools and colleges are teaching and promoting outright lies, hatred and slander against people and ideas (especially Christian, Republican, and conservative people and ideas). They have decided that these people and ideas are politically incorrect, and culturally and morally reprehensible and unjust.

This past Thanksgiving, for instance, I saw many stories of teachers, students and college professors who made the false claim that Thanksgiving was a “racist” holiday because the simple contact between Europeans and American Indians resulted in the death of up to 90% of the Indian population in the Western Hemisphere due to disease. How is that the Europeans’ fault, you tell me?

Several years ago, UCLA’s English Department decided students majoring in English didn’t have to take required classes on William Shakespeare any longer! Why? Too white, too male, too English!

Then, about two years ago, North Carolina public school teachers were told they could no longer say “boys and girls” because it might hurt the feelings of a minuscule number of people calling themselves “transgender.”

Finally, just recently, University of California at San Diego banned the words Latino and Latina referring to Hispanic men and women, in favor of “Latinx.”

Democrats and radical, sex-obsessed, Anti-American, leftist, atheist, feminist, and homosexual/transgender activists are trying to indoctrinate even little schoolchildren, not just older teenagers, with this radical, ungodly, sex-obsessed agenda. Meanwhile, the system of education they’ve shoved down our throats is failing to teach most schoolchildren the basics of reading, writing, math, history, and science. Instead, all these subjects are transformed into their warped, idiosyncratic, irrational, slanderous, obtuse, absurd, and factually false leftist, atheist, feminist, homosexual/transgender slogans. Sadly, too many self-described Christians, Republicans, conservatives, libertarians, “moderates,” and “independents” are letting these radicals get away with perverting the hearts and minds of schoolchildren, from preschool to high school to college. This apathetic response is making things much more difficult for those of us actively trying to overcome these evil ideologies and replace them with the True, the Good, and the Beautiful found in God’s General Revelation and God’s Special Revelation. General Revelation refers to the things that can be known and applied through nature, including science and history. Special Revelation is the things that can be known and applied through the supernatural, including the Bible, God’s miracles cited in the Bible, and our experience with the supernatural, which consists of our interaction with the Christian God, His messengers the angels, and his enemies the fallen angels or demons.

This leftist jihad against the True, the Good and the Beautiful is nothing less than the Communist Indoctrination of America, a destructive red tide of evil that I call “The Big Red Schoolhouse.” It originates with the socialist/communist writings of Karl Marx, including THE COMMUNIST MANIFESTO. I outlined the four basic principles of this Communist Indoctrination in my previous article, “Red Tide Two,” https://www.theculturewatch.com/red-tide-two-democrats-and-the-communist-indoctrination-of-america.

Now, some people (or even many) may ask, What does this have to do with God, the Bible, and, much less, the Gospel of Jesus Christ? To which I reply, “Everything!”

Thus, Christians can’t afford to ignore philosophical, political, social, or economic issues. Such issues are clearly part of the Gospel of Jesus Christ, which impacts all aspects of our lives.

The great Christian historian Christopher Dawson traces the development of Christian education (which was philosophical, moral, and religious as well as practical or pragmatic) from the monks in the British isles and Western Europe to the great universities that rose up in Western Europe, especially France and Italy in the Eleventh and Twelfth Centuries, in his book RELIGION AND THE RISE OF WESTERN CULTURE. Eventually, says Dawson, a penchant and a passion for “a rigorous and elaborate training in the art of logical thinking,” infused by a re-discovery of the writings of Aristotle, led to a belief that all of life, personal and historic, “is illuminated by a metaphysical vision of the universe as an intelligible unity.” As a result, all academic work and every area of knowledge (including science) “was coordinated and subordinated” to Christian and biblical theology, the doctrine of God.

This impressive development led to a spirit of reform within Christian Europe, but that spirit of reform dissipated in the Roman Catholic church and gave way to the Protestant Reformers, who appealed to biblical truth and justification by Grace alone through Faith alone. Eventually, it also gave way to a dissatisfaction with the unification of Church and State, leading to the Protestant, Calvinist and biblical notion that Church and State are two distinct but not totally separate “governments” within the Kingdom (or Divine Rule) of God (see Matthew 6:33, Romans 13, Mark 12:17, Acts 5:29, and Chapter XX of Calvin’s THE INSTITUTES). (This notion is different from the liberal understanding, where Church and State are totally separate.)

Despite the split within the Body of Christ between Catholic, Protestant and Orthodox Christians during the Middle Ages and shortly thereafter, “a new Christian culture had been born,” Dawson writes at the end of his magnificent book:

“From the root of nature there springs the unexpected and unpredictable flower of grace and the fruit of the spirit [sic], which is eternal life. Christianity is the labour of love to which every man is called according to his personal gifts, and his social vocation, and the Church is the community of love – the house of unity into which the harvest of humanity is brought. . . .

“And the importance of these centuries of which I have been writing is not to be found in the external order they created or attempted to create, but in the internal change they brought to the soul of Western man – a change which can never be entirely undone except by the total negation or destruction of Western man.”

Sadly, however, the destruction of Western man, and specifically America, is exactly the goal of Karl Marx and his leftist progeny of today. That destruction begins with Marx’s stated goal in THE COMMUNIST MANIFESTO to abolish all religion, but especially the Christian religion and its biblical and historical heritage that made America great. Removing Christianity and the Bible from the educational system is not just an attack on all Christians and Christianity’s biblical and historical heritage. It’s an attack on logic, science, humanity, and the True, the Good and the Beautiful. It’s a rejection of philosophical, moral, and religious order as well as a rejection of political, social/cultural, and economic order, and, ultimately, a rejection of America and Western Civilization.

As Kirk writes in his article, “Ten Conservative Principles,” “First, the conservative believes there exists an enduring moral social order. That order is made for man, and man is made for it:  human nature is a constant, and moral truths are permanent.”

Christians, conservatives, and other people who would restore the enduring order of Western Civilization, America and God would do well to take back control of America’s educational system and restore the Christian culture that Christopher Dawson writes so passionately about in his book. They can do that not only by bringing the Gospel of Jesus Christ and the Bible back into the classroom, but also by following the light that such scholars as Russell Kirk, the monks of the Middle Ages and other Christian leaders of yesterday left us. We stand on the shoulders of these giants. Using their insights, we can take a stand against the hate-filled leftist ideologues trying to destroy Christian culture and the American education system, and trying to corrupt the hearts and minds of America’s children and grandchildren.