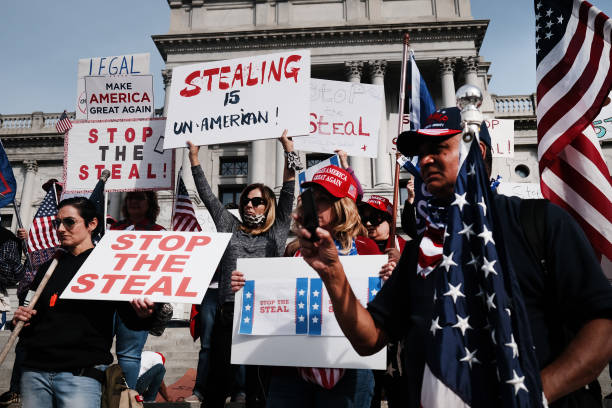 America needs President Trump to find and reverse the apparent voter fraud and ballot irregularities created by the Democrat Party in most of the swing states.

Below is a list of the many policy successes and achievements under President Trump’s leadership. This list of accomplishments shows why the President must win the current battle over election fraud in the swing states during the 2020 presidential election on Nov. 3.

Photo ID:  HARRISBURG, PENNSYLVANIA – NOVEMBER 05: Dozens of people calling for stopping the vote count in Pennsylvania due to alleged fraud against President Donald Trump gather on the steps of the State Capital on November 05, 2020 in Harrisburg, Pennsylvania. The activists, many with flags and signs for Trump, have made allegations that votes are being stolen from the president as the race in Pennsylvania continues to tighten in Joe Biden’s favor. (Photo by Spencer Platt/Getty Images)