President Obama Wants a Balanced Plan? Here’s One for Ya!!! 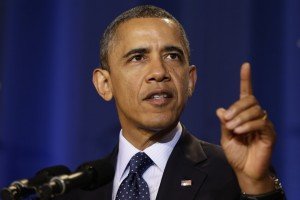 By Dr. Tom Snyder
President Obama keeps saying he wants a “balanced” plan to replace the “sequestration” deal he engineered with the Republicans that reduces government spending by $1.2 trillion over 10 years.

Well, here’s a “balanced” plan for you, Mr. President:

How about a balanced plan of massive spending cuts AND massive tax cuts, Mr. O! Thus, keep the across-the-board sequestration cuts and add all the cuts from the $125 billion annually that the GAO said in 2011 that your administration wastes in fraud, abuse, and duplication of programs while at the same time slashing our sky-high capital gains taxes and corporate business taxes, cutting the high gasoline taxes we pay, and cutting the top income tax rate to the same rate it was under President Reagan, 28%.

Now, there’s a “balanced” approach that a person could really get behind, Mr. President!
Of course, President Obama’s idea of balance is very small spending cuts, except in national defense, coupled with high tax rates not only for the wealthy but also for the middle class.
That’s why, however, the Republicans should simply counter his proposal by saying that their “balanced” approach is to combine large spending cuts with large tax cuts.
By now it’s become perfectly clear that Mr. Obama’s policies are anti-business, anti-freedom, and Anti-American. (They’re also godless, satanic, anti-family, anti-biblical, and Anti-Christian, but that’s another story.)

The Republicans in the House should just go ahead and pass their own “balanced” approach of spending cuts and tax cuts.

In passing such a bill, they can cite an August 2009 Harvard study by economists Alberto Alesina and Silvia Ardagna (http://www.economics.harvard.edu/faculty/alesina/files/Large%2Bchanges%2Bin%2Bfiscal%2Bpolicy_October_2009.pdf) proving that spending cuts and tax cuts are the best way to create economic prosperity. And, they should keep noting that the government keeps wasting at least $125 billion a year (and probably much more) in fraud, waste, and duplication, not to mention the billions of dollars wasted in such government departments as Education, Energy, Commerce, Agriculture, the Environmental Protection Agency, etc.

Obama and his minions, however, don’t really want efficient, honest programs. If they did, they would get rid of failed programs like Head Start, the college loan program, and the millions given to PBS and Planned Parenthood.

No, what they want is complete control over how you run your life, your family, your church, your school, your house, and your business. All for a radical notion of communist “equality” that will make everyone miserable and will never really satisfy anyone, not even the minorities and poor people they claim to represent.

So, bring on the sequestration! And, let’s double down on that plan by adding even more cuts and giving the American people the tax relief they deserve.
Four years of Obama’s economic jihad of misery is enough!