Obama a Christian? – A Closer Look

Editor’s Note: Sharon Sebastian is an author, writer, public speaker ,and contributor to various forms of media including cultural and political broadcasts, print, and online websites. In addition to the heated global debate on creation vs. evolution, her second book, “Darwin’s Racists – Yesterday, Today and Tomorrow,” highlights Social Darwinism’s impact on America’s political ideology today and its influence on current policy out of Washington (www.DarwinsRacists.com). Reviewers proclaim “Darwin’s Racists” a “Must Read,” “Incredibly Timely” and “Perhaps the Most Important Book in Publication Today,” as it addresses Social Darwinism’s national influence with its Marxist/Socialist underpinnings that directly impact the fractious political, educational, religious, and social environment in America today. 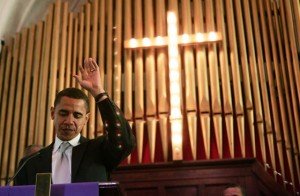 Obama a Christian? Millions of Christians pray nightly – “If only it were so.” Not just for the country, but for the man. God’s grace and mercy through Jesus Christ is the greatest of life’s blessings on all who profess Him as their Lord and Savior in adherence to God’s Word in the Bible. Less than that is a deception to self and others about being Christian. God’s Word warns of that deception. True Christians may prefer a president be Christian, knowing that such a person will strive to live by the Godly principles upon which this nation was founded, but they do not require that a President be Christian.

President Obama says he is a Christian “by choice.” True Christian faith is based on God’s Word in the Bible. Yet, Barack Obama has mocked the Bible by saying that parts of it are “obscure” and should essentially be disregarded. A true Christian does not pick and choose God’s word to serve his own agenda and then disregard it as being obscure when it does not. The Word of God speaks clearly on taking the life of the unborn, homosexuality, mocking the faith, serving false gods, and manipulating biblical scripture to deceive others. As mentioned in a previous article: “Christian Purge – The Obama Factor,” found at www.DarwinsRacists.com, Obama’s demand for “redistribution of wealth” is a blatant affront to the 10th Commandment of God that declares no Christian is to covet their neighbors’ goods or property. In a vehemently anti-Christian act, the White House is pressuring clergy to preach Obama’s policies displacing the Word of God with the word of Obama in the pulpit. Our founders warned against the church ever again becoming a tool for government.
The President can pray to anyone or anything he wants, but unless he prays to and openly declares that “Jesus Christ is his personal Lord and Savior,” then his claim to being Christian is just words. Does this President bow to the God of the Bible as the Creator God of the universe? The White House signaled mere weeks prior to a critical election that the President prays daily, but to whom? I met a lovely Muslim woman who happily told me that Muslims pray to Jesus. She said Muslims consider Jesus to be a great prophet, a good man, and an example of how to live your life, but that Jesus is not God to Muslims. They admire him along with many other “good prophets” whose precepts they want to follow. Obama told a backyard audience in Albuquerque, “The precepts of Jesus Christ spoke to me in terms of the kind of life that I would want to lead by being my brothers’ and sisters’ keeper, treating others as they would treat me.” During that backyard photo-op, however, he chose not to again mock Christians for “clinging to their religion.” Nor did he repeat what he reportedly told Newsweek in 2008, that he had “found Christ,” then reportedly countered, “But, I leave open the possibility that I’m entirely wrong.”
Obama did say that, “I think my public service is part of that effort to express my Christian faith.” There is great tragedy or delusion in that statement since most of his public actions have been an affront to Christianity. Does Obama misrepresent Christianity through ignorance or as a purposeful attempt to conform Christianity to his own agenda and motives? By his own actions and words, Barack Obama has assaulted the Christian faith and condescendingly rendered asunder Biblical doctrine. President Barack Obama reportedly laid claim to the Christian faith through 20 years of Black Liberation Theology which began as a communist movement in South America, which devised its own “radical faith,” then labeled it Christianity to bolster its cause. Today, it is viewed as a politically infused counterfeit claim to Christianity. Barack Obama’s primary White House spiritual advisor is reported self-avowed Communist, Rev. Jim Wallis, an anti-capitalist who is inculcating the Bible into Obama’s transformative “wealth redistribution” socialistic political strategy. Wallis declares the Bible is all about “social justice,” which is a core tenet of Socialism. Social justice is not biblical. In effect, it is an attempt to deny what the Bible is unquestionably all about – Christ’s sacrifice on the cross for all who call Him Lord.
One cannot declare himself Christian if he advocates taking the life of the unborn, discarding newborns to die if one survives an abortion, mocking God’s word as “obscure” or without significance regarding homosexuality, advocating covetousness of your neighbors’ goods and property, or scoffing Christians as “clinging to their religion” in a blatant effort to secure votes.
The most tragic “reveal” about Obama’s claims to be Christian is that he declares he can only be saved through “collective salvation” – a socialist attempt at twisting and changing scripture. The Bible, God’s Word, irrefutably teaches the Christian doctrine of “individual salvation,” through a personal, one-on-one relationship with Christ alone. “Collective salvation” represents the antithesis of Christianity as it rewrites the whole of scripture from a socialistic perspective that mocks Jesus’ sacrifice on the cross. Only when you stand before Christ, humbled, repentant, and alone, accepting Him as your God, can you only then truly call yourself Christian. Anyone who does not believe this biblical tenet may call themselves anything they want, but not Christian. Mr. President, for all who bow before the God of the Bible, His Word demands that we display our faith by actions, in accordance to His will, and not our own.