Why America, and Particularly Washington, Should Vote for Jesus 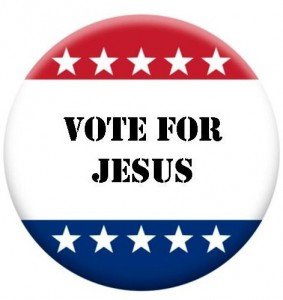 by Gary Moore, Founder of The Financial Seminary

Fox News has just published an article entitled “Does America Need Ayn Rand or Jesus?” As it was written by Onkar Ghate of the Ayn Rand Institute, you can imagine how he voted. After showing what can only be described as willful ignorance about historic Christianity, he concluded by writing: “Today we face starkly different choices….Don’t we need Ayn Rand?” Rand’s philosophy supposedly considers objectivity to be a cardinal virtue. So before you vote for one or the other, allow me to share why that sounds like Pilate asking the mob to vote for Jesus or Barabbas.

I obtained a degree in political science during the sixties. I’ve worked on Wall Street for thirty years now. As productive achievement, Rand’s moral purpose of life, had left me depressed and burned-out, I considered seminary. Instead, I began writing about the morality of political-economy and particularly Rand’s threat to traditional Judeo-Christian morality. Though I served on the board of Jack Kemp’s Empower America, I greatly fear many conservative Christians, and our nation at large, are about to make the same mistake as the Pharisees. I’ve learned many do so as they share Rand’s distaste of government and want to prosper. Yet as our pastors usually focus exclusively on fundraising, we don’t realize our Bible contains adequate caution about the economic burden of big government (Dt 17) while avoiding the constant anger (Romans 13) that make life a living hell for Randists. Jesus also told the Parable of the Talents, which surely commends productivity on this earth.

Still, these two philosophies are largely dichotomous. I once discussed those dichotomies with Leonard Peikoff, Rand’s St. Paul, over lunch hosted by a Christian foundation. When I asked him to share his worldview, he replied: “I don’t give a s___ about the world. I only care about my family.” Our fellow diners were shocked. But not as much as when I explained that was actually an expansion of Rand’s ethic as she hardly loved her husband Frank in the traditional sense. Rand had a long-time affair with her St. Peter, Nathaniel Branden, after rationalizing it to their spouses. Frank coped by becoming an alcoholic. On page 143 of My Years With Ayn Rand, Branden wrote: “Ayn was oblivious to the enormity of his suffering.” On page 330, Branden wrote of Rand’s “disposition to treat people in the most cold-blooded and hypocritical way.” On page 371, he informs us that his wife regarded Rand as “a monster who was utterly destructive in her dealings with people.” Call me old fashioned, but I see those as votes for the love of Christ.

To be sure, Rand’s philosophy of individualism got some things right by promoting personal responsibility. All heresies must contain some truth or people wouldn’t be deceived by them. But Jesus taught personal responsibility by saying to “love neighbor as self,” rather than “instead of self,” as Rand’s disciple’s often claim. Where Rand pales in comparison is in the area of social responsibility; whether for her husband, Branden’s wife or the needy of our world. In her book The Virtue of Selfishness, Rand wrote we can rescue our fellow passengers in a shipwreck as long as it doesn’t endanger us. Even conservatives reject that when they admire our soldiers, police officers and the firemen who entered the burning World Trade Center. Yet she goes on to say that just because we save drowning victims does not mean we have any responsibility for them when we get back to shore. Then it’s every man or woman for his or her self again, except of course, you should be nice to those “worthy” elites who can help you fulfill your selfish desires, as Rand always sought to do, even while distancing herself from relatives who helped her.

There’s little evidence that approach to human relationships brings the joy that she and Branden desperately sought during their affair. Yes, Branden had something of a score to settle with Rand when he wrote his book. But Professor Jennifer Burns also tells us in her scholarly book Ayn Rand: Goddess of the Market that Rand grew more depressed and paranoid as the years passed, in part due to her long-time addiction to amphetamines. If Marx was right that religion is simply the opiate of the masses, I’ll still vote for Jesus, even if libertarian Ron Paul gets marijuana legalized.

Admirably, Rand emphasized that philosophies are to be lived rather than simply believed. That was also a major teaching of Jesus, and all prophets of which I’m aware. Yet Rand’s disciples now argue the self-inflicted pathologies surrounding Rand and her closest disciples are irrelevant. Despite being supposed empirical rationalists who dismiss the heart and soul of mankind in worship of the mind, they never admit there’s such a thing as evil genius and Rand personified it. The real world, verses the utopia Rand imagined and inhabited while writing her fictional best sellers, provided clear empirical evidence that the true religion of Jesus, as opposed to the nonsense peddled as Christianity, was clearly superior to Objectivism. But as Branden noted, Rand “only saw what she wanted to see” (page 330). Like many Americans, she therefore couldn’t see the dichotomies of her individualism while living off relatives before discarding them or of hating government while her husband filed for Social Security.

So yes, Rand was definitely a hypocrite and likely a sociopath, as many critics have suggested. She once wrote admiringly of William Hickman, the “O.J. Simpson of the twenties.” He bragged about dismembering the body of a young girl he murdered while torturing her father with ransom notes promising her safety. But Rand thought him a Superman as he’d cast off all social norms. So much for her philosophies being life-affirming. Hugh Hefner of Playboy is a fan, as is Rush Limbaugh, Glenn Beck, Ted Turner, Clarence Thomas and several leaders of the Tea Party. None seem all that joyful to me. Nor do any seem to have spread joy among Americans. I think that’s another vote for Jesus.

The poverty of her teachings are not simply relational and spiritual. Rand’s teachings about selfishness have brought considerable economic pain to millions. That was the subject of a major article I wrote for the September 2010 issue of Christianity Today. Alan Greenspan, former head of the Federal Reserve Board, literally sat at Rand’s feet for years. Even Rand called him “the undertaker” due to his less than bubbly personality. And Greenspan almost single-handedly deregulated America’s savings and loans during the eighties and the sub-prime mortgage originators on Wall Street this decade. He was obviously ignorant or dismissive of Einstein’s most rational counsel that insanity is doing the same thing again and expecting a different result. But Greenspan finally confessed to Congress that his worldview was “flawed.” There’s a new documentary entitled “The Flaw” about that hard reality of economic life. Rand had taught Greenspan that Wall Street and CEO’s are also Nietzsche’s Supermen rather than sinful creatures who would do nearly anything for a few pieces of silver. Michael Milken, the junk bond king, re-read her philosophies when in prison, trying to discern what he did wrong if selfishness is such a virtue. Milken has thought things over and is now a noted philanthropist. Rand dismissed charity as a virtue. Another vote for Jesus?

While many on Wall Street and in corporate America still love Rand’s selfish philosophy, and sometimes seem destined to repeat Greenspan’s insanity, Rand knew little more about business and finance than she did religion. As Branden concluded on page 374, “Ayn had not formulated a philosophical system in the full sense; she had sketched the outlines of one. Some of the elements were filled in rather specifically, whereas others remained vague or entirely missing.” On page 258, he wrote: “Ayn had little interest in business or businesspeople as such–‘just as I had no significant interest in architecture, except as a vehicle for The Fountainhead.'” In other words, Rand, who only worked in Hollywood as a screen writer and at writing fiction, simply used businesspeople for her own selfish purposes. Ironically, businesspeople using others the same way played a major role in prompting the credit crisis and Great Recession during 2008. My mentor Sir John Templeton, the dean of global investing, therefore pulled another lever for Jesus as he taught us that trust is the lubricant of capitalism so financial elites must serve the average investor.

So America, as you think about voting for Jesus or Rand, understand that you must vote for one or the other. There is no “all of the above” as both Rand and Christ condemned such syncretism. And for good reason. The German Church tried to syncretize Jesus with Hitler, like Rand another disciple of Nietzsche. It suffered death for doing so, as Jesus predicted when saying we can’t serve two masters. So think hard about this statement from Rand to Branden: “Don’t ever permit yourself to think, even for a moment” (page 331). Despite what she suggested in her fiction, Rand was also a fascist who advocated reason only if people thought what she taught them to think. Meanwhile, Jesus asked us to discern Reality with heart, mind and soul. Branden’s book is little more than a journal of his search for heart. By its end, he had found his heart but had not yet found the essence of being Human, the joy and purpose of being our brother’s and sister’s keeper.

Rand’s ignorance of true Christianity caused her to want to be remembered as the greatest enemy of religion ever. Yet even she wrote: “Accept the fact that in the realm of morality, nothing less than perfection will do.” Then reflect that late in his book, Branden cautions he had grown “uneasy about her penchant for dismissing the work of other thinkers she had not read” (Page 150)…”If Ayn disagreed with someone, she rarely confined herself to stating her reasons; in a biting mixture of moralizing and psychologizing, she typically impugned her opponents’ motives, often casting them as villains in an almost theatrical sense. Moreover, she was not a conscientious scholar of the history of philosophy. Far from it; in the eighteen years of our relationship, I cannot recall a single book on philosophy that she read from cover to cover” (page 248)…”I asked her how she could make a scientific statement with such certainty, given that she had never studied the field. She shrugged bitterly and snapped, ‘Because I know how to think.’ I was astonished at how closed she typically was to any new knowledge that seemed to clash with her familiar paradigms” (Page 306).

Those last sentences surely reflect our polity today. So please don’t shrug off either personal or social responsibility, whether exercised through the state, through mediating institutions like the Church or personally. Come to think of it, those three sectors of our economy may be the three stewards Jesus referenced in his Parable of the Talents. He assured us the most effective would be rewarded while the least effective would wither. That morality strikes me as a more likely road to the Promised Land than politics has been recently.

Gary Moore has authored five books on the morality of political-economy and personal finance. You can read and view more about Rand at www.financialseminary.org.