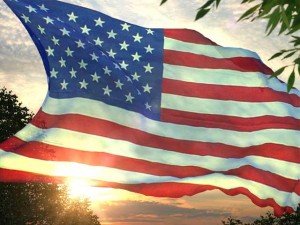 Has the Fourth of July Become a Republican Holiday?
By Dr. Tom Snyder, Editor, with Dr. Ted Baehr
A new Harvard study not only shows that Republicans are more likely to attend Fourth of July events and to view the holiday as more important than Democrats, but also that children who attend Fourth of July events are more likely to identify with the Republicans, vote Republican, make campaign contributions, and turn out to vote.
Each Fourth of July without rain before age 18, the study said, “raises the likelihood of identifying as a Republican by 2 percent and voting for the Republican candidate by 4 percent.
“It also increases voter turnout by 0.9 percent and boosts campaign contributions by 3 percent.”
Finally, the study notes that Fourth of July celebrations in Republican dominated communities are likely to be more politically-oriented celebrations than those in Democratic communities.
What the study fails to note, however, is the fact that the increased influence of Anti-American radical politics in the Democratic Party has led many Democrats to forsake the traditional patriotic celebrations honoring America that have become such a big part of many Fourth of July events. This is less true of Republicans, who belong to a party that has become more traditional and more conservative over the last few decades.
In other words, if the Fourth of July truly has become a Republican holiday, then Democrats and their supporters may only have themselves to blame!
For example, a report from this year’s July Fourth celebrations reached our desk. In it, a man reported that, after he led a short celebration honoring the day, instead of discussing all the positive things that America has given the world, all the young people at the party wanted to discuss how horrible the Europeans treated the American Indians.
This kind of one-sided negative attitude toward America and its heritage and history runs rampant in Democratic Party circles and among the liberal, unionized educational establishment teaching our nation’s youth. Such an attitude tends to diminish the average liberal Democrat’s love for America, including their love for Fourth of July celebrations and other “flag-waving” traditions.
As the leftist, atheist murderer Joseph Stalin, who hated America and Christianity, reportedly said, “America is like a healthy body and its resistance is threefold: its patriotism, its morality and its spiritual life. If we can undermine these three areas, America will collapse from within.”
The question arises, therefore, if the Democratic Party continues to promote a radical left-wing political agenda that’s inherently Anti-American, will the party leadership have to start trying to outlaw any and all Fourth of July celebrations, especially considering the Republican Party and the Tea Party movement’s strong identification with that beloved national holiday?
As I see it, there’s only one way out for Democrats if they want to salvage their party’s political integrity and restore its American colors:
Instead of attacking the traditional values of the Fourth of July – values such as the free market, private property, low taxes, the rule of law, self-government, individual responsibility, freedom of worship, etc. – they should join Republicans in uplifting those values.
Of course, if that were the case, maybe Democrats should just abandon their decrepit party in the first place and join the Tea Party movement.
How about it, Mr. and Mrs. Democrat? Ready to embrace the real Spirit of 1776?
Source: Andreas Madestam and David Yanagizawa-Drott, “Shaping the Nation: Estimating the Impact of Fourth of July Using a Natural Experiment,” http://www.hks.harvard.edu/fs/dyanagi/Research/FourthOfJuly.pdf.