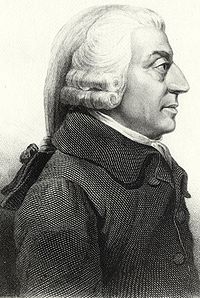 The lie that capitalism is evil promulgated by Michael Moore, teachers, professors, government officials, and even some liberal clergy shows a terrible lack of knowledge and understanding as well as mendacity.

As Adam Smith pointed out long ago, the key to the success of capitalism is a moral culture. When society loses that moral base, the free market becomes a free-for-all. Selfishness and greed triumph, and, eventually, tyrants like President Barack Obama emerge to control the markets, sending the economy into the abyss.

The problem that we faced recently with capitalism is the same problem that is faced with democracies. People who conduct business and run for office need to be people of faith and values, and, quite frankly, not any faith and values, but Christians and Jews who believe in the Ten Commandments. If Bernie Madoff had believed in Thou shalt not steal, he wouldn’t have defrauded millions of dollars from people. If Castro believed in Thou shalt not kill, he wouldn’t have killed so many of the professors, students and artists in the Cuban Gulag.

The problem with every system of organizing society is the propensity of Man to erect himself as the final arbiter of what’s right and wrong, usually for his own benefit. The more power and wealth, the more control the fallen man wants.

Capitalism is the best possible way to organize economic life. Republican democracy is the best way to organize political life. But, both systems have to be built on a moral foundation, where people realize that “the fear of the Lord is the beginning of all wisdom” and “all who follow His precepts have good understanding” (Proverbs 9:10 and Psalm 111:5-10). As Russell Kirk, the father of modern conservatism writes in “Ten Conservative Principles” (http://www.kirkcenter.org/kirk/tenprinciples.html, page two), “There exists an enduring moral order. . . . a society in which men and women are morally adrift, ignorant of norms, and intent chiefly upon gratification of appetites, will be a bad society – no matter how many people vote and no matter how liberal its formal constitution may be.” In other words, capitalism demands godly, moral practitioners working sometimes together and sometimes in friendly competition.

Too many supporters of free market principles, however (most of them ideological libertarians), mean license and licentiousness when they talk about economic and personal liberty. Such lawlessness breeds a complete disregard for the objective standards of moral conduct established by God in His Holy Word, the Bible.

Ironically, it also tends to promote an unlimited government that, bereft of its divine charge to repress violence, fraud, and depravity and punish true evildoers, suddenly finds all sorts of draconian ways to promote “social justice” and “equality,” telling people what to eat, drink, and drive, where to live, how to raise their children, and what to think politically.

True liberty can only occur when a reasonable moral order is established in a society. That is why true capitalism depends on a society, and a government, that respects a Rule of Law derived from the basic moral principles of God. Thus, the very notion of private property, which defines American capitalism and the American Way of Life, is absolutely dependent on an acknowledgement of God and His Law, as represented in such precepts as “Thou shalt not steal” and “Thou shalt not covet.”

It was no mistake, therefore, when the Founding Fathers mentioned, in the preambles to the Declaration of Independence and the U.S. Constitution, the Providence of God and the “blessings of liberty” He bestows on us. And, it is no mistake that the back of the dollar bill (which is now in grave danger from the misguided socialist policies of President George Bush and President Barack Obama) boldly declares, “In God we trust.”

Let us honor that divine vision as we confront the socialist and libertine lies that would tear it apart.