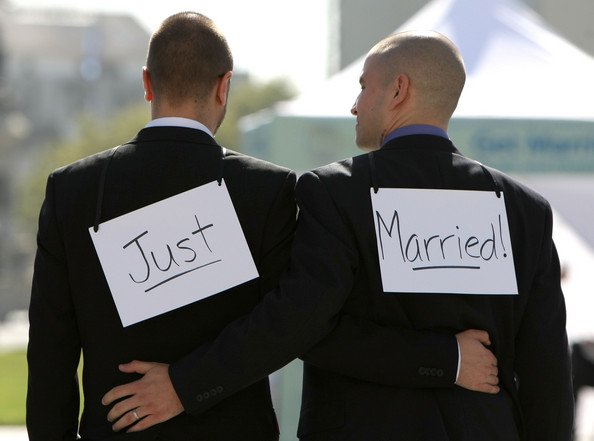 That’s simply not true, however. In fact, supporters of traditional heterosexual, monogamous marriage and opponents of same-sex marriage use seven different arguments, only one of which is religious or biblical!

1. The Biblical Argument – Same-Sex Marriage Is Not Biblical

Thus, the first argument against same-sex marriage is indeed, as Mr. O’Reilly and others suggest, a biblical one. The God of the Bible clearly says, in Leviticus 18:1-30, that adultery, incest, homosexuality, bestiality, and child murder are evil and/or despicable. Also, Jesus declares in Matthew 19:1-12 that God defines marriage as a holy institution for one man and one woman designed by God. Finally, Paul says in Romans 1 and 2 that homosexuality is a venal act that people who deny God and Jesus Christ commit. The last three Popes seem to agree with the Bible in every case! So, why doesn’t Barack Obama agree with what Bible says? Doesn’t he claim to be a Christian? Or, is he perhaps changing the definition of what it means to be a Christian, just as he’s changing the biblical definition of marriage and sexual morality?

If a state government, or the federal government, or a panel of judges legalizes same-sex marriage as an inherent “civil right,” then how do we know they won’t have to completely outlaw the Bible and penalize anyone who publicly supports it or uses passages like the ones I’ve just cited? If same-sex marriage is a “civil right,” then won’t these government officials and judges have to indoctrinate and brainwash all public school children to do the same and follow the Anti-Christian, Anti-Jewish, Anti-Bible, ungodly edicts of their ungodly self-righteous tyranny to the letter? After all, that’s exactly what the proponents of homosexuality and same-sex marriage, including President Obama, the current leadership of his party, and their allies, the major teacher unions, have been trying to do for years, from California to New York and Massachusetts, from sea to shining sea! We’ve already seen them enact tyrannical laws to enforce their ungodly, demonic will in these matters and intimidate anyone who speaks out against that ungodly/demonic will. In this light, shouldn’t the Jewish and Christian opponents of same-sex marriage be allowed to tell other people what the Bible says about marriage and homosexuality? After all, didn’t both Moses and Jesus say in Deuteronomy 8:3 and Matthew 4:4 that, “Man does not live by bread alone but by every word that comes from the mouth of God”?

Apparently, Bill O’Reilly advises Christians and Jews not to talk about the Bible at all because phony Christians like President Obama now reject what the Bible clearly says! Yet, all of us are supposed to take people like Obama at their word and call them Christians, even though they contradict the clear teaching of Scripture? Something seems to be missing here!

Secondly, there’s the argument from science. The idea of a man and a woman getting together and creating a family with children and grandchildren, is part of Nature. In fact, it’s Biology 101! Thus, Nature, and Nature’s Designer (or Design Mechanism if you’re atheist or agnostic), has created a male/female human sexual/social arrangement that also helps propagate the species.

Thirdly, there is the social argument that, traditionally, marriage is meant, among other things, to bring a man and woman intimately together as well as to protect children, including adopted children, to give them a special home that is theirs and no other child’s, and no other man or woman’s. We may even combine this argument with the biblical arguments, and say that people who aren’t Bible-believing Jews or Christians shouldn’t even get married. In fact, maybe they shouldn’t even have children at all!

4. The Historical Argument – Same-Sex Marriage Is Not Historical

Fourthly, there is the historical argument that no major society in the recorded history of the human race, and no major thinker, including Socrates, Plato, Buddha, or Gandhi, as well as Jesus and His apostles, has ever allowed same-sex marriage or defined marriage as a homosexual institution. However, all of a sudden, people like Barack Obama and the homosexual leaders publicly promoting same-sex marriage and the homosexual lifestyle are convinced that they are way, way smarter than Socrates, Plato, Buddha, Moses, Gandhi, Jesus, and all those other people for the last 5,000 to 8,000 years of human civilization. Talk about arrogance!!!

Furthermore, even the “civil rights” amendments passed right after the Civil War were passed by a society which defined marriage as between one man and one women. In fact, until only recently, the American people and the citizens of each state supported the traditional definition of marriage and never allowed same-sex marriage. Not everything that’s “old” is bad, and not everything that’s “new” is good!

Sixthly, the supporters of traditional marriage use a moral/philosophical argument. This argument posits that the very idea of a “civil right” means that there are moral absolutes, and even an enduring moral order, that MUST be obeyed. However, where do you get such moral absolutes or such a moral order without appealing to a god, the Jewish or Christian God of the Bible, or some other written document like the Constitution, the Declaration of Independence, the Bill of Rights, or the edicts of the Popes, or a Pat Robertson or Billy Graham, who all have condemned homosexual behavior and same-sex marriage? By what Moral Authority do you claim that same-sex marriage is ethical, much less beneficial?

7. The Linguistic Argument – Same-Sex Marriage Is Linguistically False and Meaningless

Finally, the seventh argument against same-sex marriage is a linguistic argument. The words “Husband” and “Wife” mean something, and they mean that, linguistically speaking, there really is no such thing as “same-sex marriage”!

In order to consider same-sex marriage as equivalent to heterosexual marriage, one has to completely change the English language to benefit a small group of people’s idiosyncratic and extremist ideology and private sexual behavior. If, therefore, we are going to change the long-established definitions of “Husband” and “Wife,” then why not change the definition of words like “liberal” and “fascist” so that, from now on, liberals can no longer call themselves liberals but must call themselves “fascists” and must own up to the Hitlerian views that now seem to be inherent in today’s liberalism? What’s good for the goose, is good for the gander!

It’s time to stop the radical attacks on the definitions of marriage and family and reject outright such notions as same-sex marriage, sexual orientation, and “gay” adoption. Judaism, Christianity, Science, History, Society, the Declaration of Independence, the Constitution, the Bill of Rights, the 13th to 15th Amendments, Buddha, Moses, Socrates, Plato, and Jesus Christ and His apostles support a traditional definition of marriage and family. The proponents of same-sex marriage haven’t a rational, scientific, social, historical, linguistic, moral, philosophical, constitutional, or biblical leg to stand on!