Red Tide: The Communist Indoctrination of America and Its Two-Party System 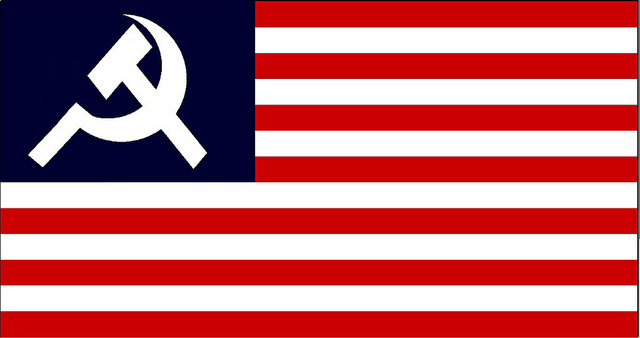 Editor’s Note:  Since this article was written, the GOP-controlled Congress has been trying to pass a replacement for Obamacare, but has been stymied because of big-government Republicans in the Congress, such as Sen. Susan Collins of Maine, who want to keep Pres. Obama’s expansion of big-government, socialist Medicaid programs. Also favoring this expansion are Republican governors like John Kasich of Ohio. Meanwhile, free-market solutions to healthcare promote by more conservative Republican congressmen and senators are stymied by the Republican leadership. Of course, Democrats are virtually unanimous in their opposition to any kind of repeal and replace of Obamacare, even any “moderate” proposals offered by Republicans.

The growing popularity of admitted socialist Bernie Sanders in the Democratic Party primaries for the 2016 presidential race (not to mention Ohio Gov. John Kasich’s socialist-sounding solutions to poverty and economic downturn in the Republican Party primaries) is a good lesson regarding what’s really happening to the United States and its sociopolitical climate.

Both men have cited the Bible and Christian teachings for some of their socialist solutions supporting the welfare state and other ill-conceived (if not villainous), left-oriented programs and reform proposals.

As a former-Marxist-turned-Christian-conservative, these solutions are not biblical solutions, much less Jewish or Christian ones.

No, they come straight from the writings of the communist philosopher Karl Marx and his disciples, including such communist blowhards as Friedrich Engels, Herbert Marcuse, Max Horkeimer, Theodor Adorno, Betty Friedan, and Erich Fromm (mostly dead white males).

As Sanders and Kasich have shown with their most misguided and most ignorant analyses and policies, such communist ideology has infected many Jews, Christians and synagogue/church leaders. Of course, it has also infected the schoolroom (which truly has become “The Little Red Schoolhouse”), the mass media and even the lords of Big Business, who have been lured by the power of Big Government and Anti-Christian, atheist, Neo-Marxist rhetoric to move increasingly toward the far left.

This destructive red tide of communist/socialist indoctrination is sweeping away America’s Jewish, Christian and biblical heritage. It’s also sweeping away all logic and common sense.

If you don’t believe me, just listen to the mindless rhetoric coming from leftist protestors at Donald Trump rallies, from politically correct university professors stepping on the rights of Christians and conservatives to voice their opinions and debate their leftist, atheist opponents, and from actors like Sean Penn, Danny Glover, Jennifer Lawrence, and even Tom Hanks. (It’s even infected Donald Trump himself, and his daughter, Ivanka, as per their ill-considered new entitlement program for working mothers allegedly needing “childcare” services.)

The situation has gotten so bad, in fact, that recent polls among young millennials age 18-34 showed that more than two thirds of them not only support socialist programs like guaranteed food, shelter, healthcare, and college tuition, up to 40 percent of them also don’t even want to hear any opposing viewpoints about such things!!!

What can we do to stop this rising red tide of crazy collectivist claptrap?

In addition to becoming/staying informed and supporting Christian conservative candidates and talking to other people (including your neighbors), you can support websites like The Culture Watch (www.theculturewatch.com) and its sister website, Movieguide® (www.movieguide.org).

Such support doesn’t have to be just monetary (though that would be very nice and much appreciated). It can also be visiting those websites regularly and sharing as many of their articles and videos as you possibly can on social media, Facebook and Twitter, or in person.

Finally, as Christians, we believe in the power of prayer. So, please pray daily for those of us at The Culture Watch and Movieguide®, as well as for the Republican and Democrat parties, including the candidates running for office.

Here is a link for sending your online donations to The Culture Watch and Movieguide®: https://www.movieguide.org/donate/.

Note:  Dr. Snyder is himself a former Marxist who, like Barack Obama and Hillary Clinton today, once was working within the Democratic Party to support a Marxist takeover of the reins of power from within, until, of course, Jesus showed him a better way of doing true good, through the power of the Holy Spirit and the power of God’s Word Written, the Bible.