Pinpointing the number of Americans in weekly worship has vexed sociologists and pollsters for quite some time.  In 1993, an article by three prominent scholars appeared in the flagship sociology journal which suggested an argument similar to that of David Olson and Bob Smietana.  Using actual headcounts in worship instead of nationally-representative polls where people report how often they attend church, they suggested weekly worship attendance is closer to 20 percent of the adult population than the widely-reported 40 percent.

Since then, a number of experts have responded.  The debates have been intense, but in recent years, the following consensus has emerged: 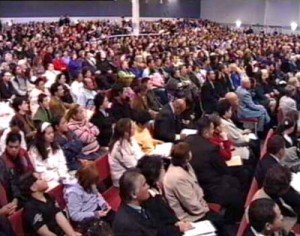 Counting heads to estimate weekly worship service attendance is far less reliable than estimates based on survey responses.  Headcounts are more error-prone because there is more room for biases—from who does the counting, from when the headcounts are conducted, from who reports the headcounts, and from how exhaustive the headcounts are (such as whether midweek services are included).

In order for researchers to generalize headcounts to the entire adult population, they must be conducted as an exhaustive census or a representative sample.  Typically, headcounts are not statistically representative in terms of denomination, region of the country, or time of year.  Even weather patterns have to be included in the mix, which means headcounters have to devote incredible resources in order for their estimates to be accurate.  Most of the time, that does not happen.

With these caveats in mind, social scientists continue to trust survey estimates of church attendance.  Pastors and church leaders should do the same.

Editor’s Note:  D. Michael Lindsay is a sociologist who specializes in issues surrounding leadership, religion, and culture. The author of several books, scholarly articles, and research reports, Lindsay has recently completed the first phase of the White House Fellows Project, which is the most systematic survey of top American leaders conducted in nearly forty years. This article is reprinted by permission.