Jesus Is Not a Big Gov’t Liberal; Abolish Obamacare and the Welfare State! 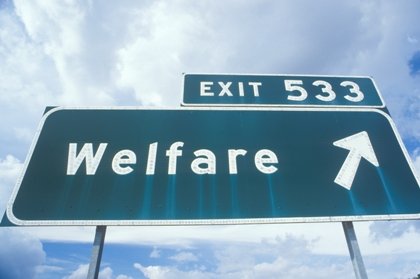 Recently, I encountered some atheists and a couple religious liberals online who objected to my assertion that God doesn’t support the tyranny of the welfare state, where the government takes money from the rich and the middle classes to give it to the poor, the sick, and the elderly.

Among the biblical passages I cited were 1 Samuel 1:20, where God clearly and directly warns the Hebrew people that establishing an authoritarian government, like a monarchy, will lead to bigger and bigger government that takes your property and taxes you 10% (or more), which in turn will lead to tyranny and virtual slavery.

One of the religious liberals said I was wrong and pointed me to Matthew 25:31-46, where Jesus warns us to feed the hungry, take care of the sick, clothe the needy, and visit people who are in prison.

This brings me to the activity of the governor of the state of Ohio, John Kasich, who claims to be a Republican. Gov. Kasich has also been citing the Matthew passage in his efforts to illegally bypass his own Republican-led legislature and order the expansion of the federal government’s Medicaid program in Ohio, which is part of “Obamacare,” the Democratic Party’s new healthcare taxes, laws and regulations (no Republicans in Congress voted for Obamacare in 2010).

There’s a problem with citing this Matthew 25 passage, or any other Bible passage in the Old or New Testament, about God or Jesus Christ’s concern for taking care of the poor, sick and needy:

Nowhere in any of these Bible passages does God, Jesus Christ, the Hebrew prophets, or Christ’s First Century apostles and disciples command that the government take care of the poor, sick and needy!

Now, the first two ways are pretty clear. People’s first obligation is to the needy, poor, widowed, and orphaned in their own families. Only after they do this do they have any obligation to help the needy, poor, widowed and orphaned through their local church organization, but first and foremost to fellow believers. God established the pattern for this kind of church giving in Numbers 18:24 and Deuteronomy 14:28, 29.

As David Chilton points out in his great book “Productive Christians in an Age of Guilt Manipulators,” the bulk of Christian giving to the local church should be geared toward financing professional theologians, experts in biblical law and church discipline, teachers of God’s word, and leaders skilled in worship. It was only every third year that ALL the giving was set aside to help the needy, poor, sick, widowed, and orphaned. Even then, the money was not given just to anyone who showed up. Those able to work but don’t, don’t qualify for help (see 1 Thessalonians 3:10). Also, those who have families to take care of them don’t qualify, nor do widows under age 60 qualify, according to the Apostle Paul in 1 Timothy 5:3-16.

Jesus Christ, who is God in the flesh, talks about the third way in Matthew 6. He tells His listeners that they should give individual charity. He also says they should give such charity secretly: “Don’t let your left hand know what your right hand is doing.”

In other words, Jesus is not a big government liberal. Nor is he a Marxist, socialist, or mercantilist. As I noted above, in none of the Bible passages just cited, nor in any others I know of, does Jesus, God, Moses, the Hebrew prophets, or Christ’s First Century apostles and disciples cite the government as the means by which the poor, needy, sick, widowed, and orphaned are housed, clothed, fed, or even educated.

Thus, a simple, straightforward reading of the Bible, God’s Word, including the “Red Letter” words of Jesus Christ, the Son of God, clearly shows that the American welfare state is both Anti-Christian and unbiblical. Any Christian who advocates such a government welfare system (including clergymen or women) should be strongly rebuked.

Furthermore, any members of any political party, including Republicans, Democrats, Reform Party members, Libertarians, or whatever, who advocate such a big government welfare system yet claim to be Christian or Jewish should be reprimanded by their fellow brothers and sisters and by all church and synagogue leaders worthy of the title. If any such believers refuse to repent and change their ways, then their names should be posted at their church or synagogue and throughout the whole land so that all Bible-believing Christians and Jews in the United States can know not to vote for these people or place them in positions of authority and leadership.

Of course, as Paul writes in 1 Timothy 5:3-16, all Christians should encourage families to take care of their own immediate family members. And, they should also encourage their churches to give at least one-third of their gross income to help the poor, needy, widowed, and orphaned.

On that note, it is interesting to recall that the Tenth Commandment in Exodus 20:17 actually protects private property by commanding people not to covet their neighbor’s house or belongings. That command applies to the average citizen as well as the elected official, the judge, and all other government officials.

Furthermore, it should be noted that the Bible condemns laziness and praises hard work. Proverbs 10:4 says, “Lazy hands make a man poor, but diligent hands bring wealth.” Proverbs 14:23 says, “All hard work brings a profit, but mere talk leads only to poverty.”

Finally, it is very important to note that, in Mark 7:20-23, not only does Jesus Christ declare that all sex outside of heterosexual marriage, including homosexuality, pre-marital sex and adultery, is evil, he also declares that both greed and envy are evil. Thus, Jesus Christ condemns both the greed of the rich man as well as the greed of the poor man, as well as the envy of the poor man and the envy of the rich man.

Thus, God condemns the politics of envy of the left, and he extols the virtues of hard work and capitalism, not just the value of charity!

RINO Republicans, liberals, and socialists like the Gov. John Kasich, the Rev. Jim Wallis, President Barack Obama, Senator Harry Reid, and former Speaker of the House Nancy Pelosi are violating the commands of Jesus Christ, who is God in the Flesh. They are also violating the commands that God gives all of us in the Hebrew Scriptures as well. If they truly want to follow the words of Jesus in the New Testament, they should stop their opposition to the real Christian movement in America and join it. One of the first things they should do immediately is start cutting and totally privatizing all government programs, including federal aid to education, for the poor.

Christians must stop the ungodly, immoral rape of American citizens with the totalitarian, left-wing, welfare state. They must establish a proper and godly system of family, church, and private charity. Not just Christians, but all true Americans, should follow God’s clear guidance in this matter. God will reward us mightily for our obedience in these important matters.