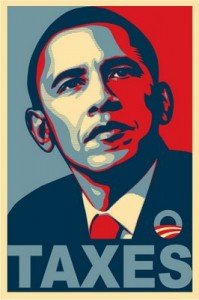 Tax figures from the U.S. government’s Internal Revenue Service (IRS) show President Obama’s not telling the truth when he says rich people are getting “special treatment” or aren’t paying their “fair share” in taxes than the average worker and the middle class.

IRS figures compiled by the nonpartisan Tax Policy Center show that households earning more than $1 million this year are paying 29.1% of their income in federal taxes, but households making $50,000 to $75,000 are only paying about 15%.

Also, for 2008, the National Taxpayers Union found the top 1 percent of American taxpayers paid 38 percent of collections for personal federal income tax while they represented 20 percent of all income.

Finally, according to the Congressional Budget Office, the top 10% of households pay more than 70% of federal income taxes and more than half of all taxes, federal, state, and local.

Obama and his supporters keep repeating this lie that rich people are getting special treatment, that middle class families are paying “higher taxes than millionaires and billionaires.”

How can these extremists be trusted on anything else they say if they’re going to spread lies like this to the American people?