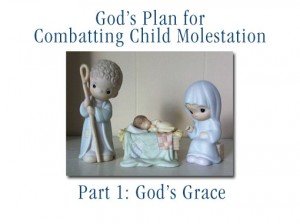 Americans are appalled and angered at the stories of Jerry Sandusky treating children from his Second Mile charitable organization as sex objects. The failure of famed coach Joe Paterno to report what he knew to the police cost him his job and his reputation.
Former child star Cory Feldman told ABC Nightline, “I can tell you that the No. 1 problem in Hollywood was and is and always will be pedophilia.” He claims the death of his close friend Cory Haims was the indirect result of a Hollywood mogul’s pedophilia.
What America needs to know is, “How can we effectively combat child molestation?”
God has the answer and it’s clear and logical. I’ll examine God’s plan in three installments. The first centers on God’s grace, the second on God’s truth, and the third on God’s justice.

THE CAUSE
The reason children are molested is because molesters have evil desires (lust). When Jerry Sandusky took little boys into the Penn State locker room, he had wicked desires he sought to satisfy. To effectively combat pedophilia, sex slavery, and the other sex-related threats to children, the number one enemy must be the lust that drives pedophiles to do what they do.

The root cause of lust is man’s sinful nature. You don’t have to train children to want things they shouldn’t have. The tiniest baby thinks first about what it wants, when it wants it. As infants become toddlers, you don’t have to teach them to be selfish.
People can argue about when pedophiles develop a desire to molest children. Some think we are born with genetic predispositions that become sexual desires. Others see sexual desires being nurtured and fed by cultural influences (pornography, having been molested as a child, etc.). What’s indisputable is that pedophilia is all about abusing children to satisfy selfish sexual desires.

When Jesus Christ began his earthly ministry, he went to a synagogue in Nazareth, opened a scroll from the Book of Isaiah and read, “The Spirit of the Lord is upon me, for he has anointed me to bring Good News to the poor. He has sent me to proclaim that captives will be released, that the blind will see, that the oppressed will be set free, and that the time of the Lord’s favor has come.” He rolled up the scroll and said, “The Scripture you’ve just heard has been fulfilled this very day!” (see Luke 4:14-21)
God’s cure for selfish sexual desires is to set those captive to such desires free.
The first step in this process is for the captive person to admit, “The God who made me doesn’t want me to have this desire. Because God hates it, it is evil. It is repulsive. I have it but I don’t want it. I want to get rid of it.” This step is referred to by Christians as “confession of sin.”

The second step is what Christians call “repentance.” It’s a change of heart. It’s a conscious decision to trade in all selfish desires (not just sexual ones) and to make the primary desire of your life to obey and please God. You think, day and night, about pleasing God. You read, and truly study, the Bible. You pray and pray and pray. You focus your energy on doing what God wants rather than focusing only on not doing what He doesn’t want.
The third step is to ask God for forgiveness. God’s desire is to set those who are captive to evil desires free. But, if you want freedom, you must seek forgiveness. After clearly recognizing that what you’ve done is offensive to God, you must come with a humble, sincere heart and ask for forgiveness. Without forgiveness, your “heart” (which is the core of your desires) is not clean.

The fourth, and VERY IMPORTANT step, is to accept the forgiveness Jesus made possible by dying in your place so your sins can be forgiven and you heart cleaned. If you fail to grasp the grace of God toward your past behavior, you’ll still feel filthy. If you feel filthy, you will be more likely to continue filthy habits. If you truly grasp that you’ve been set free by Jesus Christ, you can begin to live in that freedom – though it involves a process of renewing your mind.

Vital in this process is the recognition that, when you confess and repent, or turn away from, your sins, and seek and accept God’s forgiveness through Jesus Christ, God will give you a new Spirit – a comforter, a guide, in the core of your being. Rest assured, evil desires will attempt to return. All Christians, not just former pedophiles, experience a struggle to reject temptation and keep their focus on God’s will for their life. When you fail, admit it, seek God’s help in not failing again and again. You focus your energy on doing what God wants rather than focusing only on not doing what He doesn’t want.

A fifth step is to find your proper place in “the body of Christ.” Jesus Christ promised to build his church. He called different people to different tasks that need to be done together. To overcome lust, it’s extremely helpful to have someone you can trust who will pray with you, encourage you, and hold you accountable.

People opposed to child molestation can seek stronger laws to protect children and work to have more molesters prosecuted and locked up, but the real war is spiritual. Lust is an evil spirit. It’s one of many evil spirits that keep the world from being heaven on earth. Lust destroys lives.
Some of Jesus Christ’s first disciples thought He was sent to take the throne of the kingdom of Israel, chase off the Romans, and establish an earthly kingdom. They learned that His kingdom is not of this world. His kingdom is of the spiritual world. He was not as concerned about combating Rome as He was about combating lust. He didn’t come to release prisoners from jail. He came to release those imprisoned by lust, greed, pride, envy, anger, pride, arrogance, and resentment. He came to reveal to the world God’s kingdom filled with forgiveness, love, joy, peace, purity, rest, humility, compassion, self-control, and generosity.

If you declare war on lust, your primary desire is to see those in bondage set free. Those set free from lust stop molesting children. Those set free early enough never molest children, though they may have been headed in that direction.

In a time of war, soldiers enlist to combat what they see as evil. When Muslim terrorists destroyed the World Trade Center, many young men enlisted in America’s armed forces. The growing armies of pedophiles molesting children should inspire the enlistment of millions in God’s army.

Jesus declared his followers to be the light of the world. In truth, they are to be “the body of Christ” on earth today. Led by the Spirit of God, they are to “set the captives free.” Among other things, they’re to wage war on the lust that leads to child molestation.

Christians are called to live by God’s standards and help others to do so as well.
Sadly, it’s estimated that 50 percent of male churchgoers have a problem with pornography. Jerry Sandusky regularly attended St. Paul’s United Methodist Church in State College, Penn. and had a bumper stick on his garage door, “Be still and know that I am God. (Psalm 46:10).” Some of the most publicized pedophiles have been priests and pastors.

What doesn’t make the news are the many tremendous stories of captives set free.
The author of this article can testify that he was once was in bondage to lust. It was hard to get through a day without looking at pornography; even after accepting Jesus Christ as Lord. But, through God’s grace and considerable spiritual battle, I found such freedom that I now work many hours every day on computers, in private, and simply don’t go to pornographic websites. Not only do I not want to lust, but the thought of doing so is repulsive to me. This is God’s grace. I remember well how strong the pull used to be.
I thank God for my freedom.

By God’s grace, my marriage, that was nearly destroyed by lust, is stronger now than the day I was married (over 38 years ago). By God’s grace, I did not continue down a path that I could see was requiring me to become more and more demented in order to feel “satisfied.” By God’s grace, there are no children who will grow up with memories of my having done horrible things to them.

God’s grace is the most powerful weapon on earth for combating sin of any kind. If America is to see a real decline in child molestation, it will be because of a tremendous outpouring of God’s grace. It will be because Christians, anointed by God, will make a concerted effort to set the captives free (including those attending church).

In part 2 of “God’s Plan to Combat Child Molestation,” we will look at the astounding power of God’s truth.