The Real Bible and Sexuality 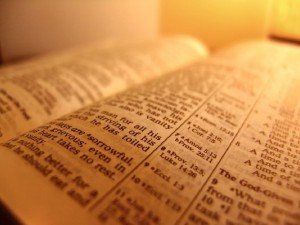 By Gary DeMar
I’m always intrigued when I see an article on a liberal website deal with some biblical topic. I hope for the best, but I expect the worst. The latest article is written by Amy-Jill Levine and Douglas Knight for the Huffington Post. The title is simple enough: “The Bible and Sexuality.”
There is more equivocation in this one article than one finds in the Congressional Record. For example:

[B]efore we even ask, “What does the Bible say?” we need to ask, “Whose Bible?” Canons — and so, cannons — differ among various Christian churches as well as between Jews and Christians, as do translations. Moreover, the Bible is open to multiple interpretations: we need to determine what is metaphor and what is to be taken literally, what is case specific and what is timeless, what is a matter of personal choice and what should be legislated.

Let me cut through the fog for you. What the authors are saying is that there is no real way to determine what the Bible says on the topic of sexuality.
Actually, the Bible is so clear on sexual matters that it becomes necessary to muddy the interpretive waters whenever possible.
How do the authors do this? By not starting at the beginning.
Instead of beginning with Genesis and the creation account, the authors begin with the Song of Solomon/Song of Songs. By starting in the middle of the Old Testament, the authors misdirect their readers.
It’s in the creation account that the standard is set. A marital relationship that includes one male and one female. It’s so clear that the authors must engage in bit of interpretive sleight of hand that most readers will not pick up on. Far down in the article they use Genesis 2:18 as a backhanded way to support homosexual relationships. Here’s a literal translation of the passage:

“Then the Lord God said, ‘It is not good for the man to be alone; I will make him a helper suitable for him.’”

The man is Adam who is a male. Here’s how our authors reengineer the verse: “given that Genesis 2:18 states that it is not good for the human being to be alone. . . .” The clear reading of the text – no metaphors or allegories – is a timeless standard of a biblical marital relationship: one man and one woman. But by translating the Hebrew word adam as ‘human being’ rather than the more precise ‘man,’ room is thereby made for homosexual relationships. And, the authors can proclaim that it’s right there in Genesis! Adam and Eve/male and female become “human and human.”
We have New Testament confirmation that the literal translation and meaning are correct because Jesus refers to the creation of Adam and Eve as the standard for a biblical marriage relationship.

“Have you not read, that He who created them from the beginning made them male and female, and said, ‘For this cause a man shall leave his father and mother, and shall cleave to his wife; and the two shall become one flesh’? Consequently they are no longer two, but one flesh. What therefore God has joined together, let no man separate” (Matt. 19:4–6).

There is no equivocation on the part of Jesus. One ‘male’ and one ‘female’ are the subject of discussion, not two non-descript to-be-defined-later-as-we-see-fit “human beings” that can include two males or two females.
Here’s more of their muddy water interpretation of the Bible: “A second [approach to interpretation] is to acknowledge that the Bible is often less a book of answers than a book that helps us ask the right questions.” What does this mean?
The Bible is filled with answers for anyone who wants answers. Too many people don’t like the answers the Bible gives, so they work overtime to shape and fashion the Bible like Silly-Putty so they can form it into the latest sexual novelty.
I can agree with their third point. Now if we can only get them to practice what they claim to preach:

Third, we must read carefully. This means not simply looking at what the text says: it requires seeking accurate translation, knowing to the best of our ability why the text was written and what it meant to its original audience, determining how it has been interpreted over time and what other passages say concerning the same subject.

Turning the male Adam into a non-descript ‘human being’ is not an “accurate translation,” and neither does it fit with what the original audience and subsequent audiences would have understood when they read the passage.
Now it starts getting interesting as the authors move in for the kill: the story of Sodom and Gomorrah. Their interpretation of the incident was made popular by the late John Boswell in his book Christianity, Social Tolerance, and Homosexuality (1980). Here’s how they tell the story:

[T]he first interpreter of the story of Sodom and Gomorrah, the prophet Ezekiel, condemns Sodom not for homosexuality but for “pride, excess of food, and prosperous ease” and for failing to “aid the poor and needy” (Ezekiel 16:49). Nor does the story suggest that homosexuality is the problem. The Hebrew of Genesis 19 tells us that all the people of Sodom sought to “know” the two visitors: the people would have included the women, and they, like the men, died in the conflagration that destroyed their city. The problem is sexual violence, not homosexuality; attempted rape, not love.

There is so much wrong with this interpretation that I am compelled to deal with it fully since it is standard pro-homosexual balderdash. First, Ezekiel 16 does list Sodom’s sins as “arrogance,” “abundant food,” and “careless ease,” and a refusal “to help the poor and needy.” These are found in Ezekiel 16:49. But, there is a verse 50: “Thus they were haughty and committed abominations before Me.” The word “abominations” is the same word used in Leviticus 18:22 to describe explicit homosexual behavior. It’s a term of strong disapproval in Hebrew (to’evah). Anyone who had access to the Torah knew exactly what Ezekiel meant when he used the word “abominations.”
Second, Levine and Knight argue that “The Hebrew of Genesis 19 tells us that all the people of Sodom sought to ‘know’ the two visitors.” I suspect they mean, to get to know them; to express hospitality. Is that what “to know” means in Genesis?
Let’s establish the context. Two male (angelic) visitors “came to Sodom in the evening as Lot was sitting in the gate of Sodom” (Gen. 19:1). Lot invites the two men “to spend the night” at his “house” (19:2). The angels want to “spend the night in the square.” Lot “urged them strongly” not to stay in the square but to enter “his house” (19:3). The square was most likely a pick-up point for homosexual and other sexual liaisons. Outraged that they could not engage the male visitors “the men of the city, the men of Sodom, surrounded the house, both young and old, all the people from every quarter” (19:5). Notice the emphasis on “men.”
When rebuffed by Lot, the men of Sodom demand that Lot “bring them out to [them] that [they] might have relations with them” (19:5). The word translated “relations” is the Hebrew word yadha (“to know”). The word yadha is used seven times in Genesis as a reference to sexual relations (Gen. 4:1, 17, 25; 19:5, 8; 24:16; 38:6). It’s also used this way in other Old Testament passages (38:26; Num. 31:17, 18, 35; Judges 11:39; 19:22, 25; 1 Sam. 1:19). The first occurrence is early in Genesis: “Adam knew his wife Eve, and she conceived and gave birth to Cain. . .” (Gen. 4:1). In the three uses of yadha (‘know’) in Genesis 4, the word refers to sexual relations.
When Lot offers his daughters as substitutes for the Sodomites’ request for the two men, he uses yadha (Gen. 19:8). If the word yadha means “have sexual relations with” in Genesis 4:1, 17, and 25 and 19:8, then it means “have sexual relations with” in 19:5. It’s obvious that Lot, already corrupted by the city, offers his daughters as sexual substitutes. The men of Sodom were interested in sex, and if they could not get it consensually, they would get it by force.
Third, without actually addressing Leviticus 18:22 and 20:13, the authors dismiss them as an explicit prohibition against homosexuality. They make the following bold claim: “As for the Levitical commandments typically cited as prohibiting homosexuality, the Hebrew is not as clear as some claim. . . .” Tell me what you think: “You shall not lie with a male as one lies with a female; it is an abomination” (Lev. 18:22). The verse is clear in its portrayal of homosexual activity without using the word “homosexual.”
The Greek word homo means “same.”1 The word “homosexual” was coined to describe what is going on in Leviticus: “A male shall not lie sexually with a male as a male would normally lie with a female” (Lev. 20:13). Even pro-homosexual writers admit this verse depicts same-sex (homo+sexual) activity, but they deny that same-sex activity is condemned by God. Contrary to their opinions, same-sex relationships are described in the Bible as “an abomination.”
The authors make a fourth point. “[W]e do well to recognize that biblical standards are not always our standards, and nor should they be. The Bible makes adultery a capital crime; if that legislation were put into practice, we’d knock out a third of our population. King Solomon had 700 wives and 300 concubines; we become apoplectic over bigamy.” Murder is a capital crime, and yet we still have laws against murder. Rape is a capital crime, and rape is still abhorrent and punished. So are our authors saying that we should indulge the practice of adultery, polygamy, bigamy, and by inference, homosexuality? The authors argue that since there are so many divorces in America “if that legislation were put into practice, we’d knock out a third of our population.” We should at least consider that such severe penalties for certain practices reflect the seriousness of sins and the damage done to all involved.
Our intrepid authors end with the following:

[W]e should continually reassess our views. If we ignore tradition, experience, science, and the personal testimony of our neighbors and look only to Scripture, we become bibliolators: we turn the Bible into an idol. And if we listen to those with whom we disagree rather than dismiss them as benighted literalists or atheistic relativists, then at the very least we might be able to avoid the demonization that usually comes with the culture wars.

Does the “we” include them? Are they continually reassessing their views? At the beginning of my response, I noted that the authors were all about muddying the waters of biblical authority. This final paragraph proves it.
So where are we to look for our standards? Believing what God says does not make what He says an idol to be worshipped but a law to be obeyed. “For this is the love of God, that we keep His commandments; and His commandments are not burdensome” (1 John 5:3). Violating God’s commandments is a burden. Teaching God’s commandments is the loving thing to do. God’s law is good (1 Tim. 1:8–11).
While “tradition, experience, science, and the personal testimony of our neighbors” should not be dismissed, they are not stable moral standards for living. Traditions change; experiences are subjective; science can’t make moral judgments; and the personal testimony of our neighbors still need to be judged by a fixed moral standard even as we share their burdens. The Bible is clear: homosexual relationships are contrary to the clear teaching of the Bible.

Editor’s note: Gary DeMar is President of American Vision and on the Board of Reference for Christian Film & Television Commission®. This article was written for MOVIEGUIDE(r). For more articles by Gary DeMar, please go to: