Freedom to be Christian But Banned from Acting Christian

Secularists and the ACLU Strip First Amendment of Meaning

Christians, Orthodox Jews or anyone with traditional views of sex and marriage should be barred from state university counseling programs unless they agree to violate their beliefs. That’s the gist of the amicus brief the American Civil Liberties Union (ACLU) filed Feb. 11 in a case in which a Christian student is challenging her dismissal from a graduate counseling program at Eastern Michigan University in 2009. 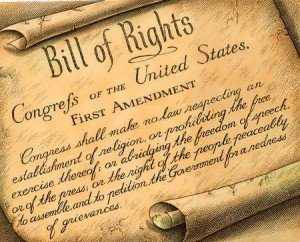 Julea Ward had asked that another student take the case of a homosexual suffering from depression because, being a Christian, she could not affirm the person’s sexual relationships. Miss Ward was dismissed and filed a lawsuit charging unconstitutional viewpoint discrimination, religious discrimination and compelled speech. On July 26, 2010, a U.S. district court denied her claim, and she appealed to the 6th U.S Circuit Court of Appeals.

The ACLU’s brief to the appeals court contends that compelling someone to act against her beliefs does not violate her freedoms of religion or speech. The ACLU quotes the university’s response to Miss Ward saying she had a “conflict between your values that motivate your behavior and those behaviors expected of your profession.” In other words, you’re a conscientious Christian, so get lost.

This is one of several cases in which Christians have been told to conform to “diversity” requirements or leave counseling programs. At Augusta State University in Georgia, Jennifer Keeton sued last year after being told she had to take re-education courses to counter her Christian morality or be expelled from a master’s program. After losing in a U.S. district court, she has appealed to the 11th U.S. Circuit.

In the Michigan case, the ACLU’s brief rests heavily on the American Counseling Association’s (ACA) Code of Ethics, which prohibits discrimination based on “sexual orientation” and a dozen other characteristics. Miss Ward contends that the code allows referrals to other counselors in situations such as hers.

The brief cites last year’s egregious U.S. Supreme Court ruling in Christian Legal Society v. Martinez, which upheld the decision by Hastings College of the Law at the University of California at Berkeley to eject a Christian legal group for not allowing open homosexuals in leadership positions. Writing for the majority in that case, Associate Justice Ruth Bader Ginsburg said: “Condemnation of same-sex intimacy is, in fact, a condemnation of gay people,” and “our decisions have declined to distinguish between status and conduct in this context.”

By this reasoning, if you don’t support gluttony, you “condemn” overweight people. Let’s further take this apart. If, as former ACLU attorney Justice Ginsburg says, conduct defines status, and the ACA’s code says counselors must conform to what amounts to a positive or neutral view of sex outside marriage, then Christians must conduct themselves in a way that violates their beliefs. Their status becomes that of either outlaws or liars.

This is not rocket science. We are witnessing radical ideologues bent on replacing natural law with a wholly different set of values, which is what Justice Antonin Scalia said about the legal profession in his dissents in Romer v. Evans (1996) and Lawrence v. Texas (2003).
Many professional associations have climbed aboard this runaway train. If this trend is not halted, the result will be a world full of signs that say, “Christians need not apply.” Just ask Catholic hospitals that are being told to perform abortions – or else.

The underlying problem in the Michigan counseling case is twofold: First, there is no credible scientific evidence that homosexuality – unlike Miss Ward’s black race – is inborn and unchangeable. As Colin L. Powell once pointed out, comparison of race with sexual orientation is “convenient but invalid.” Second, the Constitution explicitly protects religious freedom but is silent on “sexual orientation,” a term concocted in the 20th century as a bludgeon against Judeo-Christian morality.

So, in the name of the U.S. Constitution, a black woman who believes in biblical morality is barred as an unfit bigot from a program that is supposed to teach counselors how to encourage healthy behaviors. On the other hand, people who affirm deviation regardless of consequences face no such sanction.

The ACLU says the university is making an important ethical distinction. It sure is. Whereas Miss Ward draws from the Western moral tradition that inspired the U.S. Constitution, the university’s ethics are based on the cause de jour in liberal faculty lounges.
The bottom line is that forcing Miss Ward or Miss Keeton to pretend to buy into the left’s pansexual dystopia is supposed to be a reasonable action. If so, then anyone with traditional religious beliefs can be barred from a state institution if he or she fails to betray personal beliefs.

This is no longer remotely about tolerance or civil rights. It’s about turning the nation’s moral values upside down so that wrong is right and right is hate.

The agents of radical change have hijacked the God-given, unalienable rights that were codified precisely to protect people like Julea Ward from unjust discrimination. As the public sector expands, it is bankrupting the nation and moving us closer to the criminalization of Christianity.

In the short run, this must be met with superior legal and political forces. Long term, we must radically reduce the public sector to where it can no longer threaten American liberty.