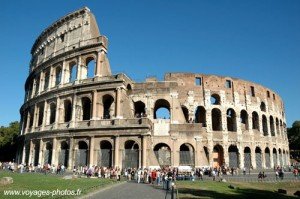 In the centuries preceding, Rome had been overrun with illegal
immigrants: Visigoths, Franks, Anglos, Saxons, Ostrogoths,
Burgundians, Lombards and Vandals.

They first assimilated, many working as servants, but soon came so
fast they did not learn the Latin language.

Though militarily superior and marching on advanced road systems, the
highly trained Roman Legions were strained fighting conflicts
worldwide, and eventually troops had to be brought home from the
frontiers, such a Britain.

Rome had been weakened by a large trade deficit, having outsourced
its grain production to North Africa, and when the Vandals captured
North Africa, Rome did not have the resources to retaliate.

“Bread and Circuses!” Citizens of Rome were kept distracted with
violent entertainment in the Coliseum and Circus Maximus. The Roman
Emperor kept citizens appeased with welfare and free bread.

“Those who live at the expense of the public funds are more numerous
than those who provide them.”

Tax collectors were “more terrible than the enemy.”

“O, Roman people, be ashamed…Let nobody think otherwise, the vices of
our bad lives have alone conquered us.”