Conservative Funding: The Urgent vs The Prudent 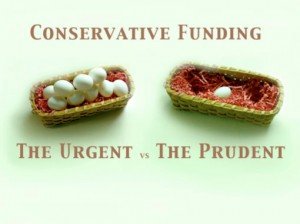 By David Outten
Millions of dollars are pouring into the campaign coffers of Mitt Romney. Some making this “investment” are betting on a Romney victory and want to be considered his “friends” should he be elected. Others send money in the hope that America will elect a less liberal president.
Many who send money to Romney fear the appointment of more Supreme Court Justices anxious to further twist the Constitution in favor of radical socialism. They fear greater debt, higher taxes, reduced freedom, and ever growing government. They see their investment in Romney’s campaign as urgent.
In 1980, Ronald Reagan carried 44 states running against Jimmy Carter. He carried 49 running against Walter Mondale in 1984. Children born since 1984, and raised with massive media influence, tend to be less conservative. In 2008, Barack Obama took 66 percent of the vote among voters age 18-29. John McCain won a small majority of votes of those over 30.
In 2012, there are four more years worth of young voters raised on huge doses of liberal media. More and more of them come from homes where fathers are absent and government benefits put food on the table, a roof over the head, and provided a bus to the local school.
Money spent on 30-second commercials for Mitt Romney cannot reverse the impact of many thousands of hours of liberal indoctrination through the mass media, the public schools, and the college campuses.
Prudence
As Russell Kirk wrote in his seminal work in the 1950s, THE CONSERVATIVE MIND, prudence is an essential value of the intelligent conservative. To support this value, Kirk quotes John Randolph of Roanoke, who said, “Providence moves slowly, but the Devil always hurries.”
The true conservative understands that you will never elect another Ronald Reagan without building a solid base of true conservative voters first. Republicans will not even nominate true conservatives unless they believe there are enough true conservatives to defeat a radical liberal like Barack Obama, whose policies more and more each day resemble those of the murderous thugs who ran the Soviet Union.
A prudent conservative would look for ways to encourage youth to hold conservative values. Thus, a commitment to redeeming the mass media of entertainment should be high on a list of conservative priorities, not just Christian ones. Many of the votes that went to Barack Obama in 2008 were cast by youth who loved programs like FRIENDS and WILL & GRACE that made promiscuity look fun and traditional values look outdated.
In the last four years, some TV networks have stepped up their ridicule of conservative values. Disney/ABC’s program GCB mocks Christians, and MODERN FAMILY does its best to make a same-sex couple look as acceptable and as “loving” as any other arrangement you might choose to label “family.”
Thirty-second Romney commercials will not rebuild the conservative base. Unless we invest in media reform, conservatives will wind up sending “urgently needed” funds to the political campaigns of liberals who appear to be only a little less liberal than their opponents.
Over time, conservatives will have even less money they can give to any political campaign because the liberal war on the “rich” is really a war on free enterprise, the private ownership of property, and the middle class.
The bottom line is this:
If conservatives refuse to fight the culture war, they will lose the political one.