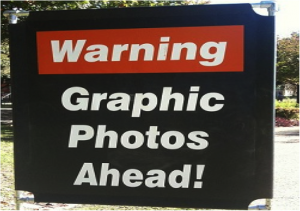 Not really, but we’ll talk about them.

Abortionists perpetrate unspeakable crimes against unborn children, but some believe it is those who display pictures of their handiwork who are the real extremists. At times, even those in the pro-life movement have accused those who use “graphic images” of “extremism.” <http://www.nytimes.com/2013/11/21/us/anti-abortion-forces-second-guess-tactics-after-ballot-defeat-in-albuquerque.html?ref=todayspaper&amp> Do such images help or hurt the cause?

I confess, I have struggled with the role such images play in the pro-life movement. Despite the deep emotional impact such images had on me the first time I saw them as a young man, the other side characterized them as violence pornography <http://www.unmaskingchoice.ca/faq/aren%E2%80%99t-graphic-abortion-images-pornography-isnt-considered-obscenity>, and I feared widespread use might scare children or desensitize viewers to the horror of abortion.[1]

But none of this gets at the heart of the question:  Is this tactic effective?

Since scientific polling data are hard to come by – a fact that should be changed – we can ask ourselves what history tells us about the usefulness of “graphic images.” Heartbreaking images of dead children compelled two national figures to speak out on the issue – and, at least once, directly led the president of the United States to change international policy.

One of those figures was Martin Luther King, Jr. <http://therightswriter.com/2009/10/mlk-was-no-conservative/> . According <http://books.google.com/books?id=HecWJnClV3wC&amp;dq=Martin+luther+king+vietnam+1965]&amp;printsec=frontcover&amp;source=in&amp;hl=en&amp;ei=L7zWSoWiLZKMMuCOgN0I&amp;sa=X&amp;oi=book_result&amp;ct=result&amp;resnum=14&amp;ved=0CCsQ6AEwDQ#v=onepage&amp;q=r>  to numerous <http://books.google.com/books?id=Q_71R9mdYTgC&amp;lpg=PA179&amp;dq=#v=onepage&amp;q=> biographers <http://books.google.com/books?id=FnFT9JpG8VsC&amp;pg=PA258&amp;dq=martin+luther+king+vietnam+1965&amp;client=firefox-a#v=snippet&amp;q=ramparts&amp;f=false>, King decided to more stridently oppose the war in Vietnam after seeing a photo essay <http://books.google.com/books?id=gM2WRhLGPyIC&amp;pg=PA72&amp;dq=martin+luther+king+vietnam+ramparts&amp;client=firefox-a#v=onepage&amp;q=martin luther king vietnam ramparts&amp;f=false> of Vietnamese children bombed by napalm. It was entitled “The Children of Vietnam” <http://nla.gov.au/nla.cat-vn2540986> and published in the January 1967 issue of Ramparts, the New Left periodical edited by Robert Scheer <http://www.truthdig.com/staff/robert_scheer> and, later, my old co-author (and neoconservative) David Horowitz.[2]

When he came to Ramparts magazine he stopped. He froze as he looked at the pictures from Vietnam. He saw a picture of a Vietnamese mother holding baby, a baby killed by our military. Then Martin just pushed the plate of food away from him. I looked up and said, “Doesn’t it taste any good?” and he answered, “Nothing will ever taste any good for me until I do everything I can to end that war.”. . . That’s when the decision was made. Martin had known about the war before then, of course, and had spoken out against it. But it was then that he decided to commit himself to oppose it.[3]

MLK later told <http://books.google.com/books?id=5jf6K9MMcSUC&amp;pg=PP7&amp;dq=ramparts+magazine+editors&amp;hl=en&amp;sa=X&amp;ei=ul6BUojcB5H54AO-qIGYCA&amp;ved=0CD4Q6AEwAw#v=snippet&amp;q=&quot;children of vietnam&quot;&amp;f=false> a meeting of the Southern Christian Leadership Conference in 1967, “I picked up an article entitled ‘The Children of Vietnam,’ and I read it, and after reading that article I said to myself, ‘Never again will I be silent on an issue that is destroying the soul of our nation and destroying thousands and thousands of little children in Vietnam.’”

King did not live to see the end of the Vietnam War but his opposition, couched in moral terms, was influential.

Others whose consciences were pricked by images of suffering were able to have a direct outcome on policy.

Fifteen years later Ronald Reagan’s deputy chief of staff, Michael Deaver, attended a series of National Security Council meetings about the Lebanese civil war. In an effort to drive the PLO out of Lebanon, Israel lay siege to Beirut, and the bombing took a heavy civilian toll on women and children.

“For the past week, I had seen pictures of the bodies piling up in Lebanon, and now my mind couldn’t escape those images of the carnage,” Deaver wrote in his memoir.

He confronted President Reagan in the Oval Office, threatening to resign if the Gipper didn’t take action to stop the killing. “I can’t be part of this anymore – the bombings, the killing of children,” Deaver told <http://books.google.com/books?id=d9DOoB33ENsC&amp;printsec=frontcover&amp;dq=michael+deaver+drummer+reagan&amp;hl=en&amp;sa=X&amp;ei=-7ZgUtC3I6614AOGt4D4Ag&amp;ved=0CC0Q6AEwAA#v=onepage&amp;q=beirut OR lebanon&amp;f=false>  the president. “You’re the one person who can stop it,” he said. “All you have to do is tell [Israeli Prime Minister Menachem] Begin you want it stopped.”[4]

“Menachem, this is a Holocaust,” Reagan said. Begin objected and cajoled, but Reagan insisted that the bombings stop. Ultimately, Begin ordered Defense Minister (and future prime minister) Ariel Sharon to end the attacks <http://books.google.com/books?id=C1kvsToagGEC&amp;pg=PA124&amp;dq=#v=onepage&amp;q=> – and then reduced Sharon’s authority in the cabinet <http://books.google.com/books?id=K0LJu7wr1IEC&amp;pg=PA4&amp;dq=#v=onepage&amp;q=> for having ordered them.

Showing the victims of injustice shows its full brutality and inspires public backlash, while tyrants conceal grave crimes. The American people have a deep-seated revulsion of the Nazi Holocaust in part because its atrocities have been exposed in textbooks and covered by an increasing number of heart-tugging films every decade.

But Hollywood – where Fidel Castro, Che Guevara, and Hugo Chavez are considered modern-day heroes – has produced not one big budget film on the Holodomor <http://www.euronews.com/2013/11/22/ukraine-s-enduring-holodomor-horror-when-millions-starved-in-the-1930s/>, the Soviet campaign of genocide and forced starvation carried out against Ukraine’s Orthodox Christians. It claimed the lives of 7 to 10 million <http://www.cbc.ca/news/canada/saskatchewan/holodomor-statue-unveiled-for-saskatchewan-legislature-1.2427280>. The same is true of Mao’s Great Leap Forward and Cultural Revolution (Mao claimed 45-60 million victims <http://www.dailymail.co.uk/news/article-2017839/Madman-starved-60-million-death-Devastating-book-reveals-Maos-megalomania-turned-China-madhouse.html> ) and the Spanish Red Terror (perhaps 50,000 in one summer, including 6,832 Catholic clergy and religious <http://www.jstor.org/discover/10.2307/261121?uid=3739864&amp;uid=2&amp;uid=4&amp;uid=3739256&amp;sid=21102929605347>). Only one film has been produced about the Khmer Rouge’s attempt to return Cambodia to the Year Zero (at the cost of 1.7 million deaths <http://therightswriter.com/2010/11/anti-american-globalists-defend-u-s-at-the-un/>, nearly one-quarter of the population), THE KILLING FIELDS.[5] The Armenian genocide <http://therightswriter.com/2011/04/will-obama-betray-armenian-christians-on-easter-sunday/>, in which Muslims killed 75 percent of the nation’s Christians, has been the subject of one film, ARARAT.

Hollywood studios and America’s academic institutions may as well be run by historical revisionists who believe these atrocities never occurred. Thanks to their silence, the average American hardly knows these events transpired.

Concealing the suffering of these victims consigns their plight – and the evil of its perpetrators – to the memory hole. The same holds true for abortion victims.

Yes, viewing these images can be hard, both on the passerby and the committed activist. This, too, is true of other graphic images. “King wasn’t the only one moved by [Ramparts’ “Children of Vietnam”] piece,” one chronicler of the Sixties wrote <http://books.google.com/books?id=5jf6K9MMcSUC&amp;pg=PP7&amp;dq=ramparts+magazine+editors&amp;hl=en&amp;sa=X&amp;ei=ul6BUojcB5H54AO-qIGYCA&amp;ved=0CD4Q6AEwAw#v=snippet&amp;q=&quot;children of vietnam&quot;&amp;f=false>. “Many staff members were in tears while working on the spread, and it gave art director Dugald Stermer nightmares. He later said it was ‘just about the nastiest job I’ve ever had.’”

Pro-life activists may need to limit their exposure to such images. No less a pro-life leader than Randy Alcorn has written <http://oregonfaithreport.com/2013/11/are-graphic-anti-abortion-ads-appropriate/>, “To be honest, I sometimes look away now, because I don’t need any more convincing. I know for sure that this is the killing of the unborn.”

“But even as I say that, it’s healthy for me sometimes to look because it is good to be disturbed again,” he added.

In truth, abortion images have the power to profoundly disturb their viewers for the same reason other graphic images do: They are supposed to. The mistreatment of another living human being should scream at our sense of humanity until we are spurred to stop it.

Are such images effective? Until a more conclusive report is available, I’ll say yes.

Some, like King, can shape how the masses think about a topic while others, like Deaver, can spur the most powerful man in the world to end the wanton killing of children. If only Valerie Jarrett <http://therightswriter.com/2009/09/valerie-jarrett-the-next-van-jones/> were shocked by the Douglas Karpen photos.[6] If only Obama were committed to protecting babies – even babies born alive – instead of bragging that he is (and I quote) “really good at killing people.” <http://www.jillstanek.com/2013/11/obama-im-really-good-at-killing-people/>

Apparently Kermit Gosnell’s actions, or the thought of a child struggling for life on the table after a botched abortion resulted in a live birth, cannot move our current president. But they can and have moved an unknown number of Americans to demand greater protections for the unborn. They demanded individuals use their influence to attain what their conscience tells them is right: that all unborn children are human beings endowed by their Creator with the right to life, liberty, and the pursuit of happiness.

When conscience sets influence to work on behalf of righteousness, justice prevails.

1. Monica Migliorino Miller has written a well thought out apologia for the use of such images in the September issue of New Oxford Review, which I would commend to anyone.

2. The piece, written by William Pepper, grossly overstated the number of Vietnamese child casualties <http://books.google.com/books?id=gM2WRhLGPyIC&amp;pg=PA72&amp;dq=martin+luther+king+vietnam+ramparts&amp;client=firefox-a#v=onepage&amp>. It claimed U.S. soldiers had wounded or killed one million Vietnamese children by that time. Most experts place the number at perhaps half that much.

6. Despite decades of viewing abortion victim photos, and having a pretty rugged constitution, the pictures of Doug Karpen’s victims forced me to stop and weep.

Editor’s Note:  This article is republished from The Right’s Writer, http://therightswriter.com. The Right’s Writer is an online archive of articles by Ben Johnson, conservative journalist, editorial writer, media guest, and frequent Media Matters target. Ben is U.S. Bureau Chief of LifeSiteNews LifeSiteNews.com and guest host of Nthing But Truth with Crane Durham on AFR Talk. His writings have appeared in The (UK) Guardian, Human Events, and have been cited by CBS News, “The Rush Limbaugh Program,” Sean Hannity, Michelle Malkin, and many others. His insight and quick turn-of-phrase have landed him regular appearances on The Michael Savage Show, The G. Gordon Liddy Show, The Michael Reagan Show, The Alan Colmes Show, and a host of programs across the nation.