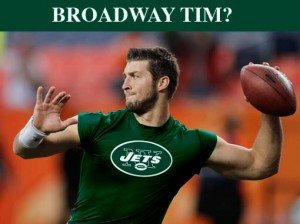 Tim’s greatest strength as a football player is not his ability to bench press more weight than he should be able to, or to his ability to run with a football. It’s his ability to inspire a whole team to a higher level of play. This is not done overnight. Tim has to earn trust, and in New York he enters a community (and probably a locker room) that doesn’t trust him.

I advise Tim to read the Book of Acts. Both Paul and Peter wound up in Rome. Rome was the “biggest media market” of that day. All roads led to Rome, and in reverse, roads from Rome led everywhere. Paul and Peter had tremendous influence on the world of their day. Our lives today are impacted by their influence.

Tim can’t be expected to have the same influence as authors of New Testament letters, but in modern America having Tim Tebow in New York is remarkable. This should be even more controversial than last year in Denver where he dominated sports headlines for most of the season. Like the Apostles, Tim Tebow will have those who despise him and those who love him.

This conflict is exactly what makes Tebowmania a huge media success. A movie without conflict will be a bomb. Conflict draws attention and interest. It entertains. The nastier football analysts are to Tim Tebow the more his fans enjoy seeing anything he does that’s positive. His last second heroics last season were high drama that ignited the hatred of his critic and the adoration of his fans. It was tremendous entertainment.

Who can predict what Tim will have the opportunity to do on the football field in 2012? But, with Tim in New York you can predict both very nasty, even vulgar, criticism as well as devoted fan support. While Bronco fans will be watching to see if Payton Manning can get them to a Super Bowl, the world will be watching what becomes of Tim Tebow in New York.

Most people scoff at the idea God is orchestrating Tebowmania. I don’t. I see it as a story God is unfolding. I find it riveting to watch. I expect it to be riveting this year. It may not be easy on Tim, but I pray that God will use him in a profound way to continue being a light to the world.