Before We Lose It: A Reminder of Our American Culture 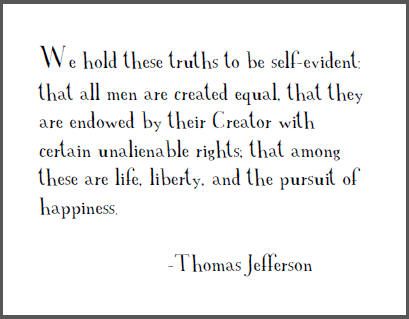 Never ask a fish to describe water. Not because they can’t talk, but because they have never known anything but water. Can you describe the American Culture? More importantly, can you defend the definitive values that have shaped us to this day? Right now, the American values are being denied and challenged more than ever, and by people inside the walls.

What can you identify as essential? Certainly, the idea of the “American Dream” would come to mind – the belief that anyone can rise from the bottom to the top through their own efforts and fortunes, not held back by caste or government restrictions. “Log cabin to White House” describes not only six Presidents but also Jackie Robinson, Condoleezza Rice, Tyler Perry, and Kanye West. Do we want to keep that or would we rather pull down the achievers to give equal results to the less accomplished? How would that help our society or economy to advance? Socialism is more than a “safety net” for the unfortunate. It’s always enforced by authorities who fare better than those they “care” for. Look at past examples or current Cuba or Venezuela.

How about other values so central we hardly notice them until they are gone?

Our basic morality comes from a long-engrained tradition of the Judaea-Christian ethics from ancient Commandments and Christian charities modeled for centuries by saints and societies. Prohibitions against killing, stealing, lying, and other selfish acts are still not common in other cultures, past or present. No other ancient religion or civilization taught the value of family, women, orphans, foreigners and slaves like the Christian Faith with its Jewish roots that would be maintained in the West for centuries. What higher ethic is there than “Do unto others as you would have them do unto you” or “Love your enemies”? How many of our hospitals, orphanages, schools and shelters have religious sponsors? Would you want to let a government decide what is right and wrong?

The Judaea-Christian view of Man is central. Each of us is a unique creation of God, in partnership with loving parents, who has value in and of himself. That is because God gave him life and the co-equivalent rights to be free to pursue his best life and secure himself and his family. If God is the author of life and these natural rights, then they can never be taken away. However, if we can eliminate God and elevate government to that height, then your rights and freedom are no longer guaranteed. What the government gives can be taken away.

But there’s another aspect of that view of Man that’s equally important – that man by his own choice, individually and collectively is flawed. His compulsion to survive and advance his interests can lead to the exploitation and death of others or their rights. His potential for corruption without restraint can be seen in our worst histories. Madison said, “If Men were angels, no government would be necessary.” Progressivism sprang from the belief after Darwin and the Industrial Revolution in the “perfectability” of man and society by political and economic reforms led by an educated elite who knew better than the unwashed masses. Two world wars and a Cold War filled with atrocities too awful to mention caused us to doubt that “perfectability” part, but the demand for authoritarian rule by elites continues, if only because it promises “security” to the masses through entitlement and protection. Those who make the promises are promoted by those control the educational and journalistic media, with whom they will share the benefits. Do we really want that?

The total elaborate legal and judicial underpinnings of our American system stem from the British Common Law developed over centuries and transplanted to each colony/state. On top of that came the principles of the “British Constitution,” not one document but a collection earned over centuries beginning with the Magna Carta(1215 AD). From those traditions came the Rule of Law, the role of Judges, the importance of Parliament, the Separation of Powers, “no taxation without representation”(1285), and so much more! Are we really ready to throw out the baby with the bath water?

For a mob of miseducated youths funded by plutocrats that would like to remake America to create a system that has failed everywhere it has been tried is suicide for our society. Trying to “cancel our culture” and to rewrite our history to serve their purposes will end the nation as we have known it. We who value America and its principles, despite its flaws, need now to speak out and to stand up. Ronald Reagan said, “Freedom is never more than one generation away from extinction. We didn’t pass it to our children in our bloodstream. It must be fought for, protected and handed on for them to do the same, or one day we will spend our sunset years telling our children and our children’s children what it was once like in the United States where men were free.”

If you think these thoughts deserve consideration, pass them on. Oliver Wendell Holmes said, “The best test of truth is its ability to get itself accepted in the marketplace of ideas.” The problem today is that the marketplace of ideas has been monopolized by those with the loudest voices and the most money. “We the People” are not being heard. Say something yourself.

Our next installment will focus on the philosophical insights of the Enlightenment that The Founding Fathers understood in shaping our Declaration and Constitution.

Editor’s Note:  Dorsey M. Deaton, a dear friend of MOVIEGUIDE® and a Christian brother, has a Ph.D. from Emory University, 1970 and is a Retired Professor of U.S. History, Georgia State University.