A WARNING TO AMERICA FROM RUSSIA 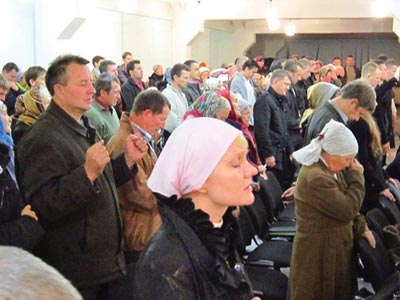 A New Evil Empire
Christians in Russia are expressing their shock at how America has now become the New Evil Empire, promoting abortion and privileges for perverts, with their aggressive pro-homosexual agenda, bullying African governments to legalise abortion and homosexuality, and sending generous aid to radical Middle Eastern governments which severely persecute the Christian Church.

Devastating Consequences
Most Americans seem oblivious to the devastating consequences of their State Department’s foreign policy: The bombing and burning of churches in the Middle East that has followed the Arab Spring, was in so many ways funded and fuelled by US State Department policy. The devastation of Christianity in Iraq, where under the dictator, Saddam Husein, Christians were protected, but now under the Islamic democracy installed by American forces, Christians are severely persecuted. More than a million Christians have fled Iraq since 2003. These realities are seldom realised in America.

Pouring Fuel on the Fire
Now the US government is channelling aid to al-Qaeda affiliated Islamic Jihadists in Syria, who are viciously persecuting Christians in areas that they control. The secular military dictatorship of Assad had left the 6% of the population who were Christians alone, and actually protected them from the radical Islamicists. Now the West is destabilising another country, where Christians were experiencing some stability and protection, by supporting insurgents who are turning Syria into a catastrophic blood bath.

Ronald Reagan and Alexander Solzhenitsyn
Xavier Lerma of Pravda in Moscow, writes: “Reagan called the Soviet Union the Evil Empire and rightly so. The Soviet Union was the Russian people held hostage by the communists – as Alexander Solzhenitsyn wrote.” On 30 May 1988 in Moscow, President Ronald Reagan was at the Damilov Monastery. He said: “There is a beautiful passage that I would just like to read, if I may. It is from one of this country’s great writers and believers, Alexander Solzhenitsyn, about the Faith that is as elemental to this land as the dark and fertile soil.” He wrote: “When you travel the byroads of central Russia, you begin to understand the secret of the pacifying Russian countryside. It is in their churches. They lift their bold towers graceful, shapely, all different, high, over mundane timber and thatch. From villages that are cut off and invisible to each other, they soar to the same heaven… the evening chimes used to ring out, floating over the villages, fields and woods, reminding them to abandon the trivial concerns of this world and give time and thought to eternity.”

Christian Russia vs. Anti-Christian America
Lerma writes: “Putin and Reagan listened to Alexander Solzhenitsyn. Those who listen to their elders tend to be wiser. Vladimir Putin allows Christianity to flourish, unlike, the liberals in America, who have their own warped idea of freedom from God and a denial of evils existence in the world.

War Against Christianity
“There is a reason that most public schools in America do not teach the Bolshevik Revolution and its true consequences. There are people in the West that want to remove everything related to Christ from public view, just as the communists did during the Soviet enslavement of Russia. 20th century Russia is proof that Christianity can prevail against the darkness and confusion.

Liberals Fear Christianity
“Today, the liberals who control the West fear Putin as though doomsday was tomorrow. It is not a nuclear threat, but rather a spiritual renewal that threatens them. It is not Putin, but Russia’s Christianity they fear. Rather it is Christ they truly fear and hate. They tried to persuade Americans by scaring everyone with ideas of Putin as the evil KGB, out to destroy the world… they demonize Putin because it is not our world, but their liberal world that is in danger of being destroyed.”

Christianity is Advancing in the East and Retreating in the West
Xavier Lerma writes: “How can conservative media sources in America, who claim to be Christian, ignore their Christian brothers in Russia who are now successful? Martyrs they ignore and the blood that was shed to restore the Christian Church in Russia. They are con artists playing the conservative side as fools while the liberals enslave the rest. Devout Russian Christians are on the march… not like the communist Soviet Union, who spread wars like Obama and the US are doing now. These Russians are like Disciples of Christ, who lovingly reach out to their brothers and sisters, helping men and women in darkness enslaved by a materialistic society, who are truly in need of Christ. Look to the East.”

Resisting the Homosexual Agenda
The reason Western media are demonising President Vladimir Putin and Russia, he says, is that they have passed two laws, strengthening the penalties for “propagating homosexuality amongst minors, and for insulting peoples’ religious convictions in public.” The so-called Gay Propaganda Bill introduces fines for propaganda of non-traditional sexual relations to minors, including on the media, on the internet and via viral adverts. Under this new law, lesbian, gay, bisexual, and transvestite (LGBT) rallies are prohibited, as is the distribution aimed at forming non-traditional sexual morality in children. Fines and imprisonment are prescribed for the propagation of homosexuality in Russia. The all-Russian Public Opinion Centre (VTSIOM), in a poll in June showed that 88% of Russia support this amendment to the law.

Apostasy in Western Churches
Pravda notes: Oddly enough, the West is the only place where some so-called Christian leaders are gay! Their Christian churches omit certain Biblical teachings against homosexuality. The Russian government is encouraging the nation to return to Christian values, while the American government is going in the opposite direction!

Christ Cannot Be Defeated
Yet, Russia’s Christianity, and anyone who defends it, rain on the gay parade and their upside down world. Pravda notes that the liberal media “In their evil souls they shriek like devils because they know that Christ is the true God and true power that they cannot defeat. They thought the Bolshevik Revolution destroyed holy mother Russia. Christ cannot be defeated!”

US Democrats Hostility to Christian Freedom
Other comments on the Pravda website: “The incredible irony is that religious freedom is under assault by the US Democratic Party and government. The battle in the US is truly a spiritual battle of good verses evil.”

Reversal of Roles It is an extraordinary reversal of fortunes that the countries behind what used to be the Iron Curtain, now have some of the most dynamic Christian churches and the highest percentage of church attendance in Europe. It would appear that Western decadence, immorality, materialism, compromise and superficiality in churches and shallow, sensational entertainment, have been more deadly to the church than virulent atheist propaganda and vicious communist persecution in the East.

The Desperate and Urgent Need for Revival and Reformation When Russians enjoy more religious freedom than Americans, then something is seriously wrong. When Russians express their concern about lack of freedom and spiritual discernment in America we should be very concerned.   “Should you help the wicked and love those who hate the LORD? Because of this, the wrath of the LORD is upon you.” 2 Chronicles 19:2