A City on a Hill: How Should We Live? Why a Christian Worldview Is Important 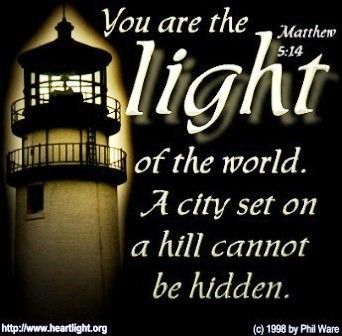 Because everyone therein manifests the fruit of the Holy Spirit: Love, joy, peace, patience, kindness, goodness, faithfulness, gentleness, and self-control.

So, what is a Christian worldview?
It’s the realization that you are no accident. As the prophet Jeremiah outlines (1:4-10), God planned you, created you, and selected you for a high office. He has appointed you to pluck up and pull down, to build and to plant.

His call to proclaim His Good News is paramount. He urges Jeremiah, and each of us, not to make excuses. He will go with you. You will speak His Word. Your authority will flow from Him. People may not listen; they may not believe; and, they even may reject His Word, but do not fear.

Fear traps us in slavery to the forces of darkness. When Nikita Khrushchev, the successor to the supreme leader Joseph Stalin in the tyrannical Marxist-Leninist Soviet Union, spoke out against the purges of his predecessor Stalin, a crowd member angrily shouted out, “Why didn’t you say or do anything?! You were his assistant!” Khrushchev responded, “WHO said that?” When the audience remained silent, he nodded and said, “That’s why.”

You should not be afraid, according to every book in His Word written. As a follower of Christ, your authority comes from God. So turn from doubt and pray for God’s presence, grace, and strength. God created all. Therefore, the world is planned, not chaos. God is good. Therefore, His creation doesn’t need to fear. God gives us dominion. Therefore, we can be stewards.

As 1 Thessalonians 5:16-18 says: “Be joyful always; pray continually; give thanks in all circumstances, for this is God’s will for you in Christ Jesus.”
Psalm 71 promises: Have faith that God will deliver you out of tribulation. When enemies threaten, appeal to Him for help. Vow to praise Him in anticipation of your deliverance from the hand of the wicked. He is your refuge, your freedom, your rock, your castle, and your stronghold. Remember, our great God has sent Jesus to set you free.

Hebrews 12:18-19 points out that there is a profound difference between living in Zion’s city on a hill and remaining in the desert at the foot of Mount Sinai. God’s city on the hill is promised love over fear, life over death, forgiveness over justice, and reconciliation over retribution.

When we are born again, we become heirs with Christ. Life in Christ frees us from sin, bondage, law, and temptation.

The Gospel of Luke 13:10-17 shares the story of Jesus freeing the woman crippled by Satan for 18 years. Too many fail to grasp that Christ’s love is the higher law of love, so it is good news when we accept our freedom in Christ.
The application of a Christian worldview is the first step in fulfilling our appointment as stewards of our city on a hill. What is a worldview? Simply put, a worldview is a method of seeing or interpreting a reality. This method of seeing provides a framework through which (or by which) we make sense of life and the world.

These are some the keys to understanding worldview:

The nature of reality or ontology of other religions is void of hope.

Classical Buddhism considers reality an illusion and the ultimate reality to be non-being, which means there is no evil and no need for redemption. Thus, in Buddhist areas, such as Bangkok, evils like sex slavery and sex trafficking abound with no consequences. This is heartless.

Hinduism and many New Age and pagan religions see reality as an illusion, or Maya. This nominalistic ontology is cruel because it denies the very reality of life. When Mother Teresa started caring for the dying and rejected outcasts of India, the Hindus tried to kill her because they considered the outcasts merely part of their karma and ultimately an illusion. By caring for them, they knew that Mother Teresa was undermining the ground of being or ontology of Hinduism because she was saying that the poor really exist, they really have pain and God really loves them.

Universalism suggests Jesus is not the only way to salvation. This is self-contradictory and irrational, however, because universalism is itself “one way.” More than that, however, universalism also leaves us lost, not really knowing what direction to take.

Polytheism, another branch of New Age and pagan religions, is confused. Polytheism sees the world as made up of many gods and spiritual forces. A polytheistic ontology sees reality as a cacophony of various spiritual forces. The great book, SPIRIT OF THE RAIN FOREST, tells the true story of an Amazon witch doctor who realized that the remote tribes were trapped in the stone age because of the violent servitude to multiple demigods. When his tribe was freed from such bondage by faith in Jesus Christ, they settled and prospered.

Lastly, there’s the brutal materialistic worldview of humanists and communists, which says that all that exists is the material world and the spiritual world is merely an invention of deluded minds. Thus, in Cambodia, Pol Pot tried to create the new communist man and woman by killing 1 to 3 million people (out of a population of slightly over 8 million). The Cambodian Holocaust Museum honoring those he killed shows that he photographed each person, mostly women, and then shows how he killed each one thinking that he was inventing new ways of killing. Of course, Stalin killed almost 100 million in the name of the Communism of Marx and Lenin. Since people are just material meat machines, they didn’t care.

However, the Christian and Jewish ontology is one of love. It says we live in a real world, created by the real God, wherein there are real problems, real pain, real suffering, and we need a real savior, Jesus Christ.

What you do, what you say, what you wear, where you live, and what you accomplish are all evidence of your worldview.

Thus, your worldview (which includes what values you live by) determines whether you will forgive or seek revenge, be generous or be stingy, be courteous or be rude, be independent or be dependent. People with worldviews build or destroy, rescue or torture, join churches or join gangs. Furthermore, a prevailing worldview shapes culture, and, of course, the mass media has a powerful impact on every worldview.

People yearn for a Christian worldview. For instance, we are encouraged at Movieguide® that our annual study of Hollywood shows, year after year, that very strong redemptive content in movies does much better than very strong negative content.

That said, the war is not yet won. The solution starts with you! God has a plan and calls you on a quest. God wants you to share his love with others.

We all want love. 1 John 2:7 says: “I am not writing a new commandment for you; rather, it is an old one you have had from the very beginning. This old commandment – to love one another.”

God wants us to make our culture more free and more civilized; so, go into all the world and do not be afraid. God wants us to be the light of the world. He wants us to teach our children to love Him because He loves them so much.

How should we live? As heirs of His kingdom, we come with faith and freedom and thanksgiving and the joy of the Lord.

And, what can we possibly give our children and grandchildren that is more valuable than a culture which honors Jesus?

On February 2, 1984 President Ronald Reagan told the following story to an audience attending a National Day of Prayer event.*

“This power of prayer can be illustrated by a story that goes back to the fourth century. Telemachus, an Asian monk living in a little remote village, spent most of his time in prayer or tending the garden from which he obtained his sustenance. One day [in 404], he thought he heard the voice of God telling him to go to Rome. Believing that he had heard, he set out. Weeks later, he arrived there, having traveled most of the way on foot.

“It was at a time of a festival in Rome. They were celebrating a triumph over the Goths. He followed a crowd into the Colosseum, and then, there in the midst of this great crowd, he saw the gladiators come forth, stand before the Emperor, and say, ‘We who are about to die salute you.”’ He realized they were going to fight to the death for the entertainment of the crowds. He cried out, ‘In the name of Christ, stop!”’ His voice was lost in the tumult there in the great Colosseum.

“Suddenly, a strange thing happened. The gladiators stood looking at this tiny form lying in the sand. A silence fell over the Colosseum. Then, someplace up in the upper tiers, an individual made his way to an exit and left, and others began to follow. In the dead silence, everyone left the Colosseum. That was the last battle to the death between gladiators in the Roman Colosseum. Never again did men kill each other for the entertainment of the crowd.

“One tiny voice that could hardly be heard above the tumult. ‘In the name of Christ, stop.”’ It is something we could be saying to each other throughout the world today.”

Telemahcus was a very ordinary man, who spoke with God’s authority. That he was willing to surrender his life to deliver the message showed that he was delivering a message of freedom and love.

Like Telemachus, you are called to jump into the arena and say, “Stop in the name of Jesus Christ and be set free. . . indeed.”

Please read the following verses, from which this sermon essay was derived: