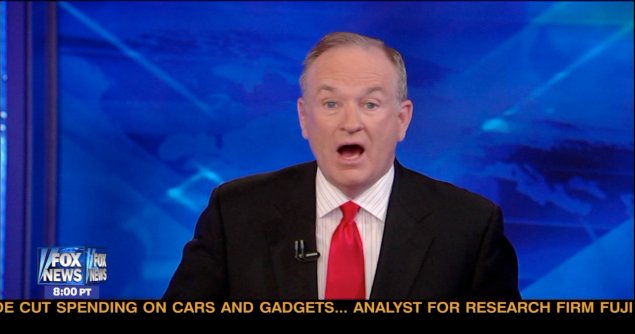 Recently, during all the hubbub over the Supreme Court and same-sex marriage, Fox News pundit Bill O’Reilly said Christians and conservatives have to stop “thumping the Bible” on the issue because people won’t be convinced by any arguments using the Bible.

To make matters worse, the next week, O’Reilly bullied conservative, and fellow Catholic, talk show host Laura Ingraham about those dern “Bible thumpers”(!). Later, on another night, he brought up the subject again with Fox News host Megyn Kelly!

Methinks the man doth protest too much.

With all due respect to Mr. O, he’s forgetting several major facts and apparent truths about the subject he’s bloviating about on his nightly TV program.

First, the terms “thumping the Bible” or “Bible thumping” is a pejorative phrase used by hateful atheists and other Anti-Christian bigots to denigrate and insult Christians preaching the Gospel of Jesus Christ, as Jesus told them to do. The history of the phrase is that it’s meant to be an insulting, condescending term. In effect, calling someone a “Bible thumper” is like using the “N” word for African-Americans or the “k” word for Jewish people. Thus, contrary to what O’Reilly tried to say, it IS an insulting and condescending term, and shouldn’t be used by anyone any more, in ANY context! Words mean things, and you can’t use them without understanding (at some level) the nature or essence of them, including their historical meaning and use.

Second, according to polls, 76.1 percent of Americans, and 2.3 billion people around the world, including Barack Obama and other supporters of same-sex marriage, claim to be Christian, and several millions claim to be Jewish. If they aren’t listening to or following what the God of the Old Testament and Jesus Christ and His apostles of the New Testament say (see Leviticus 18:1-30 and Matthew 19:1-12 on sexual sin and marriage, among other passages), they should be!
Third, Jesus Himself is recorded in the New Testament as telling Satan, “Man does not live on bread alone, but on every word that comes from the mouth of God.” If we can’t quote the God of the Bible to make any points at all, then you’ve taken away one of the major weapons that Jesus Himself taught His followers to use. How, for example, can you even begin to preach the Gospel of Jesus Christ, including Christ’s defense of heterosexual marriage in Matthew 19, or His description of sexual evil in Mark 7:20-23, without using the New Testament?

Finally, I know of no major Bible-believing Christian thinker on the “conservative” side of this issue who only uses the Bible to defend traditional marriage, especially when they’re talking to people who say they aren’t Christian or Jewish. In other words, O’Reilly was wrong from the very beginning!
The best Bible-believing Christians and conservatives use several non-religious arguments to defend the traditional view of marriage.

First, they use arguments from science – that a man and a woman getting together and creating a family with children and grandchildren, is part of Nature and Biology 101. Thus, Biology, and Biology’s Designer (or Design Mechanism if you’re atheist or agnostic), has created a male/female human sexual/social arrangement that also helps propagate the species. I anyone’s being anti-science, emotional, or ideological, therefore, it’s the proponent of same-sex marriage, NOT the defenders of traditional marriage.

Secondly, these thinkers also use the social/historical argument that marriage is meant, among other things, to bring a man and woman intimately together as well as to protect children, including adopted children, to give them a special home that is theirs and no other child’s, and no other man or woman’s. We may even combine this argument with the Biblical arguments, and say that people who aren’t Bible-believing Jews or Christians shouldn’t even get married. In fact, maybe they shouldn’t even have children at all!

Thirdly, the best Bible-believing thinkers also use the historical argument that no major society in the recorded history of the human race, and no major thinker, including Socrates, Plato, Buddha, or Gandhi, as well as Jesus and His apostles, has ever allowed same-sex marriage or defined marriage as a homosexual institution.

Fifthly, the best supporters of traditional marriage use a moral/philosophical argument. This argument posits that the very idea of a “civil right” means that there are moral absolutes, and even an enduring moral order, that must be obeyed. However, where do you get such moral absolutes or such a moral order without appealing to a god, the Jewish or Christian God of the Bible, or some other written document like the Constitution, the Declaration of Independence, the Bill of Rights, or the edicts of the Popes, or a Pat Robertson or Billy Graham, who have condemned homosexual behavior and same-sex marriage?
Finally, another argument we “Bible thumpers” use is the linguistic argument, that the words “Husband” and “Wife” mean something, and they mean that, linguistically speaking, there is really no such thing as “same-sex marriage”!

He probably didn’t mean to do it, but Mr. O’Reilly did indeed insult those people, including me, who use the Bible as one tool in their opposition to “same-sex marriage.” And, there did seem to be a condescending tone in the way he said “thumping the Bible” and in his subsequent defense of his poor, insulting use of words.

Since O’Reilly and President Obama claim to be Christian, it should be pointed out that, in Leviticus 18:1-30, God Himself tells the Israelites that adultery, incest, homosexuality, bestiality, and child murder are evil and/or despicable. Also, Jesus declares in Matthew 19:1-12 that God defines marriage as a holy institution for one man and one woman designed by God. Finally, Paul says in Romans 1 and 2 that homosexuality is a venal act that people who deny God and Jesus Christ commit. And, the last three Popes seem to agree with them!

Thus, if a state government, or the federal government, or a panel of judges legalizes same-sex marriage as an inherent “civil right,” then how do we know they won’t have to completely outlaw the Bible and penalize anyone who preaches against it or uses passages like the ones I’ve just cited? And, if same-sex marriage is a “civil right,” then won’t they have to indoctrinate and brainwash all public school children to do the same and follow the Anti-Christian, Anti-Jewish, Anti-Bible, ungodly edicts of their ungodly self-righteous tyranny to the letter? After all, that’s exactly what the proponents of homosexuality and same-sex marriage, including President Obama, the current leadership of his party, and their allies, the major teacher unions, have been trying to do for years, from California to New York and Massachusetts, from sea to shining sea! We’ve already seen them enact tyrannical laws to enforce their ungodly will in these matters and intimidate anyone who speaks out against that will.
So, instead of throwing out condescending-sounding insults to those of us on the front lines of this all-important fight, maybe Mr. O’Reilly should support us more, and not present half-truths, slander, or, worse, outright lies, about us that give aid and comfort to the Enemy.

As the Declaration of Independence says, our rights come from God, our Creator. Is it talking about Zeus? No! It’s talking about the God of the Bible.

If Bill O’Reilly and Barack Obama are indeed Christians like they’ve told everyone, then they should follow the Bible, the Word of God, and obey what Jesus Christ teaches, not what some hoary old liberal law professor or arrogant judge says.