50 Years of the War on Poverty 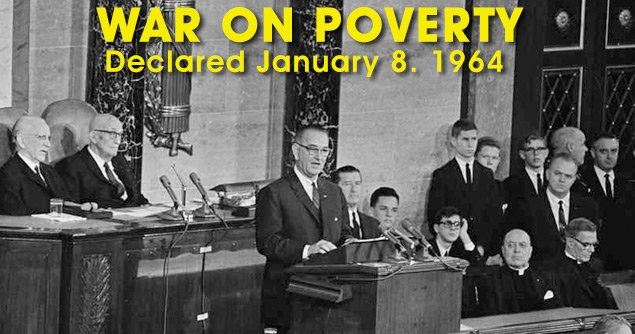 This year marks the 50th anniversary of the War on Poverty. It appears that poverty won that war.

Jesus said you will always have the poor with you. He also said, “For I was hungry, and you gave Me something to eat. . . . to the extent that you did it to one of these brothers of Mine, even the least of them, you did it to Me.”

In Christ’s day, Samaritans were half-breeds who were hated. To be called a Samaritan was an ethnic slur. Yet one day, Jesus told a parable where the hero was a good Samaritan. Jump forward to our day, and the term Samaritan is synonymous with a do-gooder.

In 1964, LBJ initiated the War on Poverty to help millions of Americans “escape from squalor and misery and unemployment rolls where other citizens help to carry them.”

It sounds good. In fact, a book written in 1968 by a prominent evangelical said: “For the Christian the ‘war on poverty’ is not a political option. It is a lifelong battle based on the mandate of Jesus Christ, who loved the poor.”

In one sense, that quote is correct on the face of it. However, in the direct political sense, it is far from correct. As they say, hindsight is always 20/20. Who should help the poor? The church, the family, the individual? Yes. The government? No.

Rather than alleviate poverty in America, the War on Poverty helped increase it in the long run.

How so? It broke the back of the urban family. They chased dad out of the house. They subsidized illegitimacy and got more of it as a result. Some ghettos resemble a war zone.

Even liberal commentators, like Juan Williams, have said that the rates of children born to unwed mothers has been disastrous for everyone, especially the children.

President Reagan delivered his “Radio Address to the Nation on Welfare Reform” (2/15/86).

The 40th president said, “In 1964 the famous War on Poverty was declared and a funny thing happened. Poverty, as measured by dependency, stopped shrinking and then actually began to grow worse. I guess you could say, poverty won the war. Poverty won in part because instead of helping the poor, government programs ruptured the bonds holding poor families together.”

Ronald Reagan added, “The waste of money pales before the sinful waste of human potential – the squandering of so many millions of hopes and dreams.”

Jesus said to help the poor; but He also told the parable of the talents, where different servants were given different amounts of money to manage. All are held accountable. Those who made something of their talents were commended. The one who wasted his talent was condemned.

In the 1990s, our government worked to reform the welfare system. According to Robert Rector of the Heritage Foundation, welfare reform has been undermined over the years by liberals in Congress as well as by the Obama Administration. Under President Obama’s plans, welfare spending will increase rapidly over the next decade.

There’s a great new book, For the Least of These: A Biblical Answer to Poverty, edited by Anne Bradley and Art Lindsley of the Washington, DC-based Institute for Faith, Work & Economics.

I interviewed Dr. Lindsley, co-editor of For the Least of These, the other day on radio. He wrote an essay for the book “Does God Require the State to Redistribute Wealth? An Examination of Jubilee and Acts 2-5.” Short answer: No, and it misreads Scriptures to say He does.

We noted in the interview that two of the Ten Commandments undercut any type of socialistic scheme, of which the War on Poverty is a prominent example: Thou shalt not steal (thus, giving sanction to private property) and Thou shalt not covet (socialism is based squarely on coveting).

Does this mean in any way I oppose helping the poor? Absolutely not. But there’s a huge difference between individuals, families, the churches, and voluntary organizations reaching out to the needy versus a faceless bureaucracy – the state, which does so inefficiently as well.

If you really care about the poor, then help them as much as possible to enable themselves. The cliché is true here: A hand up is infinitely better than a hand out.

Editor’s Note: Dr. Jerry Newcombe is a TV producer and the cohost of Kennedy Classics. He has written/co-written 24 books, including The Book that Made America (on the Bible) and (with Dr. Kennedy) What If Jesus Had Never Been Born? and (with Peter Lillback), George Washington’s Sacred Fire. He hosts gracenetradio.com <http://gracenetradio.com>  Thurs-noon (EDT).  tiam.org <http://tiam.org> @newcombejerry​.