Will the Real Pinocchio Please Stand Up! 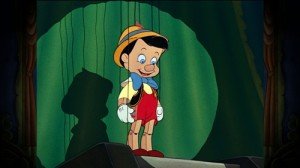 Some may remember the television show What’s My Line? It primarily ran in the 50’s and 60’s and was the longest running game show in U.S. history. It won three Emmy’s and the Golden Globe as the best TV show in 1962. I remember watching it with my father. After the panel was interviewed and questioned, the famous line would be given, will the real so and so please stand up? My father and I would discuss who we thought was the real individual during the commercials, and were often surprised. Since the original book Pinocchio, several revised editions were done as well as the 1940 Disney movie. We could line up the various versions and ask the question will the real Pinocchio please stand up?

A movie that attempts to put a literary piece into visual form “word for word” will lack literary creativity and might put people to sleep. This does not draw in the viewer and the message is lost. But neither should we take historic license with a literary piece that depicts significant and eternal lessons. To leave this out is to change the piece altogether. Unfortunately, this is common, especially when a different worldview is in vogue and hence we have now had revisionist history at the box office.

The story of Pinocchio begins in the heart and mind of Italian journalist Carlo Lorenzini, who took up the cause of his nation’s unification and independence from the Austrian Empire in 1848 when he was only 22 years old. He soon found his writings quickly suppressed. He adopted the penname “Collodi” from the name of the town where his mother was born, possibly in order to allow his writings to circulate without as much identification with him.

After Italy became united and independent by 1871, he found an avenue for expressing the liberty of conscience through animated children’s literature. He began by translating some of the fairy tales written by Charles Perrault such as Little Red Riding Hood, Sleeping Beauty and Puss in Boots, all of which held allegorical meaning. Collodi focused his energy on creating a fictional tale for children that would portray the key ideas of liberty of conscience rooted in Christianity.

Picking up on the fairy tale allegory of spiritual truth, he began writing The Story of a Marionette in 1881, publishing it in weekly sections of an Italian newspaper for children. It later became known as The Adventures of Pinocchio. The ecclesiastical and civil establishment at the time feared that the story would inspire people to think for themselves and thus resist the church and state’s control. The message within this simple story for children is clear: self-government is the only alternative for tyranny.

The original Story of a Marionette depicted several Biblical truths left out of later editions of the book. When the Disney version of Pinocchio was created in 1940, it was a further descent away from many of these truths. In the original story, the puppet is a depiction of sinful bondage – dependence on external control. Pinocchio displays his rebellion to authority (and God) immediately at his creation, the very moment he can see, speak and walk. This is the doctrine of original sin. In the Disney version, he comes to life happy and innocent, becoming “bad” as he is affected by his environment.

The Fairy (a picture of the church) creates the conscience (cricket) in the Disney version. Though the cricket (Jiminy) gives some good sermons on right and wrong (which today might even seem traditionally moral), Jiminy Cricket soon rejects the marionette since the puppet has rejected him. In the original book, just like the Bible teaches, the conscience (cricket) is strong at the creation of the puppet, and then weakens as Pinocchio neglects and ignores it. It is not the conscience that rejects Pinocchio, but Pinocchio who rejects his own conscience due to his sin – a clear Biblical truth. To be sure, there are lines in the Disney version that capture some of the original meaning of the book, such as “a lie keeps growing and growing until it’s as plain as the nose on your face.” Who can forget the image of his nose growing as he adds lie to lie?

The Fox and the Cat (symbols of temptation) in the Disney version are villains who work as companions, drawing away Pinocchio from school and other family obligations. The book more clearly portrays this deception and temptation as being “copy-cats” – or the imitation of others (without thinking) so common in children. Literary lines such as “he who is capable of stealing grapes is also capable of stealing chickens” is also lost in the fantasy of the Disney movie. Truths so clear in the book such as redemption (Pinocchio willing to be sacrificed for the lives of other puppets in the theater) don’t appear at all in the Disney movie. Though the 1940 movie is moral and family-friendly, it loses the real clarity of Christianity intended by the author of the original literary piece.

The allegory of children going to a park where “every day is a holiday” and ending up as a donkey takes place in both the movie and the book, but the book more clearly portrays the truth behind the symbols. When mere entertainment becomes the goal, amusement (with no thinking) is the result. A great line in the movie captures part of this very truth when Jiminy says “what does an actor want with a conscience anyway.” It is a satire on both real life and the theater itself. Of course, no movie can adequately capture every scene created in a good classic. Though the purpose of a movie is not to capture every literary message, the key truths should remain.

The dramatic portrayal of Pinocchio repenting and seeking reconciliation with his father in the belly of a whale is an obvious portrayal of a Biblical analogy. To be “sneezed” out on the earth again, reunited with his father, is a powerful lesson connected with the Bible. In the Biblical story, after Jonah is reconciled with God, he must be obedient – just like Pinocchio becomes in the tale. Jesus spoke of the “sign of Jonah” being the essence of the gospel. Though portrayed in the movie in an entertaining way, the clarity of this lesson is not captured in the movie as it is in the original edition of the book.

Finally, at the peak of repentance, the original version of the book Pinocchio has the puppet cry out “oh that I might be born again!” This is the ultimate solution to citizens who are “puppets” on the strings of control from either church or state. This is a far cry from the movie, however, for Pinocchio is almost dead from the whale adventure but is made a real boy by the Fairy “because he deserves it” – or in other words, he has made himself worthy for salvation by works. To be fair, Collodi’s work is set in the context of the dominant church philosophy of salvation by works so prevalent in his nation at the time, but the true source of self-government (regeneration) necessary to maintain liberty is also taught.

This was Lorenzini’s message to Italy. Without self-government, liberty cannot be maintained. The message is timeless and applicable today. When Carlo Lorenzini “Collodi” died in 1890, he had no idea how famous his work would become. When Walt Disney made Pinocchio a household word in 1940 basing the movie on revisionist editions, the movie version became more famous than the original. The environment of Hollywood in 1940 was still clean, family friendly, and taught some of the lessons Collodi intended. However, the major eternal truths of Christianity for which Collodi was willing to suffer were lost. It is this we must preserve as we train the next generation to be wise and discerning!

Note: Dr. Paul Jehle is the Senior Pastor of The New Testament Church, and Executive Director of the Plymouth Rock Foundation. The New Testament Christian School, which Dr. Paul Jehle founded in 1980, recently had its drama team portray the original classic Pinocchio as an outreach to the community. If you would like to invest in this school to preserve such education for future generations, consult the web site www.tntcschool.com . For information on his historic tours, books, CD’s and DVD’s, consult www.plymrock.org . This article may also be found on this website http://tntchristianschool.yolasite.com/