Who Will Control Your Health Care Choices? 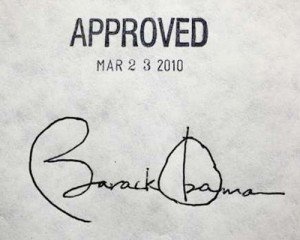 Because of the passage in 2010 of the Patient Protection and Affordable Care Act, more popularly known as Obamacare, our health care in the future could potentially change quite dramatically. Many opponents had hoped that the Supreme Court would rule it unconstitutional, but that ship sailed in late June.

One of the key features of the Affordable Care Act (ACA) is the Independent Payment Advisory Board. Critics feel that this board will basically decide who gets what treatment—and who doesn’t.

Some critics have called the Independent Payment Advisory Board a “death panel.” Is that a fair criticism?

Amy Ridenour, president of the National Center for Public Policy Research, thinks it is. She said that it “basically says, if a piece of medical technology, a drug, a procedure is more expensive than the government thinks is worth saving your life, or your mom’s life, or your six-year-old son’s life, then you’re not going to get it or they’re not going to get it: that is a death panel.”

Dr. David Stevens, president of the Christian Medical and Dental Association, decries the political (as opposed to medical) nature of the board: “That panel doesn’t have one physician on it. It’s going to be government bureaucrats in Washington making the decision who’s going to get care and who’s not. That scares me, and it should scare you.”

Dr. Stevens adds, “We’re going to see in funding decisions this whole quality of life ethic; is this person worth saving? Are they going to have a good enough quality of life to pay for this?”

The quality of life ethic is a utilitarian approach to human life. In contrast to that is the sanctity of human life view—based on the Judeo-Christian concept that every human being is made in the image of God and therefore has intrinsic value.

Dr. Stevens sums up the medical implications of a sanctity of life ethic: “Life is sacred. From the moment of conception to the point of natural death; therefore, we must treasure it and preserve it where we can.”

Grace-Marie Turner of the Galen Institute, a think-tank in the Washington, D.C. area that focuses on medial issues, asks: “How much is your life worth, to the government, not you and your family?” Unless something changes, the Independent Payment Advisory Board will make those decisions and not you and your family.

Back in the 1990s, when I spoke with columnist Cal Thomas about Hilary Clinton’s push for nationalized health care. He was concerned about medical decisions based on the quality of life ethic. He observed, “This means that the government based on a formula it will come up with will decide basically who shall live and who shall die.”

He honed in on the potential implications of this. “Now they’ll begin as they usually do in these sorts of cases with the extreme cases: 98 year old Alzheimer’s and cancer sufferers with multiple kidney dysfunctions, and then everybody will agree that maybe we shouldn’t spend several millions of dollars to extend that kind of life. But it will be a very short move from that, as we’ve seen with abortion, and increasingly with infanticide, to the government deciding your life is no longer valuable therefore, we are not going to pay to sustain it.”

Many critics of the healthcare overhaul bill see it moving us closer to complete nationalized healthcare, as we see, for example, in the United Kingdom or Canada.

Amy Ridenour co-authored a book, Shattered Lives, which documents the horrors that can result from a nationalized health care system. The book contains one hundred individual stories, such as people from Great Britain (Amy says it’s six percent) who have resorted to pulling their own teeth because of the long waiting list to see the dentist. She said, “In any given year the British Government estimates that seven hundred and fifty thousand people are on a waiting list for surgery. Now some of those people die.”

The sad thing about the ACA is how it may well drive out of medicine some of the most caring and conscientious doctors and nurses—those of conscience.

Dr. Stevens comments, “Many Christian doctors are very concerned about what this is going to mean to them personally. They’re already being pressured, discriminated against because of their unwillingness to do abortions or provide certain forms of birth control or other aspects of health care where they have religious reasons—they do not want to participate.”

A study by the Doctor Patient Medical Association found that 83 percent of American physicians have considered leaving the field because of “Obamacare” (dailycaller.com, 7/9/2012).

###
Jerry Newcombe, D.Min., is the co-host of Truth That Transforms with D. James Kennedy (formerly The Coral Ridge Hour) and spokesman for Truth in Action Ministries (formerly Coral Ridge Ministries). He has also written or co-written 23 books, including The Book That Made America: How the Bible Formed Our Nation. and Answers from the Founding Fathers. Jerry co-wrote (with Dr. Peter Lillback) the bestselling, George Washington’s Sacred Fire. www.truthinaction.org.