Is ‘Gay’ Agenda to Blame for Teen Suicides? 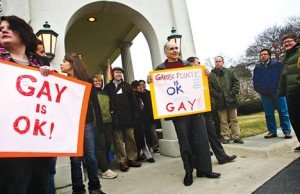 Details are sketchy in the recent rash of homosexual-related teen suicides throughout the nation, but already the “gay” lobby is ready to exploit our children one more time.
In Minnesota, seven students committed suicide in recent months, three said to be involved in homosexuality. A college student at Rutgers jumped off the George Washington Bridge after his homosexual rendezvous was secretly filmed by his roommate and then broadcast over the Internet. The roommate and another student face criminal charges.

A 13-year-old in California and another in Texas killed themselves following student taunts about homosexuality. A 15-year-old in Indiana hanged himself over homosexual-related harassment.

And now we hear that another young man, 19-year-old Rhode Island college student Raymond Chase, hanged himself. He, too, believed he was “gay.”

How do families and school communities cope with such tragedy? As a parent, I cannot even imagine the heartbreak. In trying to prevent such devastating events in the future, emotional manipulation can lead schools and communities to implement wrongheaded, harmful plans of action. That’s what is being attempted now. But it’s nothing new. It’s been the modus operandi of homosexual activism for the past 20 years.

Would widespread community embrace of homosexuality and gender-switching prevent some of these suicides? Or is misinformation actually a contributor to the despair embedded in these tragedies?

The homosexual lobby has gone into full demand mode, particularly GLSEN (the Gay, Lesbian and Straight Education Network) and the Human Rights Campaign. Obama Education Secretary Arne Duncan hosted a national summit on bullying with homosexual activists present and featuring former GLSEN president and “safe schools” czar Kevin Jennings. There’s a renewed press for passage of H.R. 4530, national legislation that goes beyond stronger anti-bullying measures to incorporate mandatory pro-“gay” propaganda.
GLSEN’s School Climate Survey claims nearly nine out of 10 “gay” students are harassed at school. However, as True Tolerance has pointed out, the survey results are unreliable. It is administered online, not conducted according to professional research standards.
As the pressure groups scream for pro-homosexual policies, they simultaneously seek to prohibit all speech opposing homosexual behavior, which is viewed as harassment or contributing to it. Compulsory re-education is the only solution, because saying “no” to homosexuality always leads to such tragedy, or so they claim. In the fantasy world of these child-corruption advocates, there’s an unbroken line connecting the actual bullies to any and all who stand up against sexual deviance.

In other words, it’s not sufficient to punish the individuals involved. No, everyone must pay because traditional heterosexual culture is guilty for daring to believe homosexuality is a negative, not a positive.

Could there be another answer, one that deals with reality?

Recent trends in public schools might provide some clues. “Gay” advocacy is growing, now aimed at kids at younger and younger ages. Over 4,000 homosexual clubs have been formed in the past decade, some now at the middle-school level. New, often sexually graphic fiction urges children to explore alternate sexual behavior and gender norms. GLSEN’s explicit book recommendations come to mind. And the Human Rights Campaign’s “Welcoming Schools” program reaches down to grade schoolers to normalize aberrant lifestyles.

Kids are urged to “come out” early. That’s exactly what several of these young victims did, and such actions are often associated with subsequent early suicide attempts.
As the supporters of homosexuality nudge kids into a known risky behavior, one associated with much higher rates of HIV and other STDs, they simultaneously suppress, marginalize or mischaracterize traditional views that discourage homosexuality.
The already troubled youngster is often the one drawn to homosexuality or gender compromise and is extremely vulnerable. For many reasons, the grand experiment is crashing before our eyes. But it’s our precious young people, the targets of the double barrels of cruel words as well as cruel sexual manipulation, who are paying the ultimate price.

One wonders if any of these kids ever heard a clearly articulated warning against homosexuality. Or were they faced with a continuous onslaught of pro-homosexual diversity lessons, novels and events like the “Day of Silence”? Were they surrounded with liberal teachers as role models and the bad example of a homosexual school club? What part did any of this play in the sad belief that homosexuality was an inevitable destiny, instead of a wayward yet changeable sexual inclination? Under almost continuous pressure to accept a lie – confusion and then despair may be the predictable result.
On top of all this, then, in some young lives come the bullies. They are a part of life, especially for boys. But for the young person with same-sex attractions, this is the final straw where they feel totally trapped, with internal feelings they have been carefully taught “cannot be changed” on the one hand, and harsh peer rejection on the other. Yes, it looks hopeless indeed.

But there’s a solution. First and foremost, kids should be told the truth that no one is born gay. Despite any budding feelings he or she may have, many people who felt similarly at that age went on to change both their feelings and behavior, and to be well-adjusted adult heterosexuals, some married with children. The gay lobbyists actively prevent kids from knowing this option. Why can’t they be “pro-choice” regarding homosexuality?
And then, the actual bullies need swift and public punishment, just as in any other instance of bullying. No looking the other way, but also no greater punishment if “anti-gay” slurs and taunts are involved. Equality should reign, as reflected in the decision by many schools to leave special rights for “GLBT” lifestyles out of beefed-up bullying prevention policies. Some states have made the similar wise choice in state law, refusing to be used by advocates as a back-door means to validate harmful conduct.
Could the stifling political correctness in certain schools be one of the reasons some kids feel utterly hopeless? Think about it. Even in the face of relentless taunts about homosexuality, many if not most kids would be able to survive intact if they saw the perpetrators punished and also knew they had a choice.

Let’s consider the real goal of homosexual activism: that everyone becomes comfortable with homosexuality, that even personal revulsion is no longer acceptable. This re-imagined “gay” utopia depends upon a widely accepted lie.

But comfort does not equate with goodness. Even if people became much more placid about open homosexuality among 13-year-olds, it still eventually emerges as the brutal violation of childhood innocence, and natural gender and heterosexual identity, that it is. The essence of authentic goodness cannot be suppressed without dire consequences now or later.

The answer is what the answer always has been in America: Punish the guilty and continue to uphold the honorable, the true and the good. No other path will be fair or just for our children, now and in the future.

Editor’s Note: Linda Harvey is president of Mission America and hosts a daily radio talk show in Ohio. This article is reprinted by permission. Linda Harvey © 2010