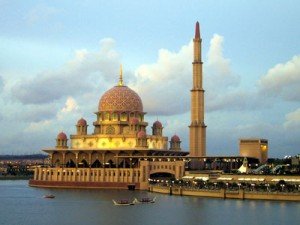 In the West, Malaysia is frequently singled out as a successful example of a moderate Islam state,
with gullible and ignorant Westerners often waxing lyrical about its old growth jungles, exotic beaches and cheap, delicious food. Malaysia has not one but nine royal families, which are all Muslim. Members of the nine take turns in ascending to the throne of the Supreme Ruler of Malaysia–the King who reigns as Head of State for a five-year term. Additionally, Malaysia’s Prime Minister and Head of Government is now and has always been a Muslim. The same applies for virtually all levels of authority in the judiciary, military, police, and education. Alongside the civil courts are the shariah courts which rule supreme in Muslim-versus-Muslim disputes, are accountable to no civil court (including the country’s highest civil court and frequently rule on disputes involving non-Muslims as well.

Islamic hegemony in Malaysia is prevalent, noticeable, and legal despite the fact that only a little over half of the population is Muslim. True to the hegemonic nature of Islam, knowledge of and respect for Islam is pervasive in the classrooms of government-run schools where a substantial part of history courses revolve around the founding of Islam and the glorious quest for independence from evil Western imperial powers by noble Malay saviours.
Islamic supremacism doesn’t come cheap. So how do Muslims pay for all of this? First, the government levies heavy sin taxes on alcohol and cigarettes–bear in mind that any money accrued from the selling of alcohol is technically haram, but never mind the hypocrisy. Secondly, it lines its coffers with the income tax of its citizens. It is open secret that most income tax paid to the Malaysian Muslim government comes from more prosperous, more entrepreneurial non-Muslims, despite them being less than half the population.

The Muslim grievance–if not obsession–with the material success of non-Muslims has always been prevalent in Malaysian society, especially after the riots and mass killings surrounding May 13, 1969, a blood-soaked date in Malaysian history. More than four decades ago in the Malaysian capital city of Kuala Lumpur, Malays rioted and killed non Muslims in large numbers; the exact death toll has been shrouded in more than 40 years of official obfuscation and will probably never be known.
Following this watershed event, the disparity between Malay and non-Malay involvement in the economy was officially fingered as an important reason for ethnic tension in the country. As such, the New Economic Policy (NEP)  was introduced to correct this imbalance and was intended to last no longer than 20 years. The NEP grants all sorts of financial benefits and privileges on the basis of race, which in Malaysia means religion. Malays and other citizens designated as ‘bumiputera’ (Sankrit for ‘sons of the soil’) are overwhelmingly Muslim and under the NEP are entitled to all manner of benefits, such as lower income tax rates, lower interest rates on certain loans, extra government assistance for Malay-owned business, and so on. Also, non-Muslim businesses are compelled to take on ‘Bumiputera’ partners who are entitled to a free cut of the company’s profits without being compelled to do any meaningful work in return. Malay-owned companies, often owned by government cronies, are also entitled to outsized shares of government contracts. In fact, the NEP amounts to nothing more than a thinly-disguised jizya system, where infidels pay and pay and pay some more to the ruling Muslims. It has been over 40 years now since the NEP was introduced by the Muslim government, and there is no end in sight.
Malaysia’s agenda of Islamic supremacy goes beyond funding and maintaining politically untouchable programmes  like the NEP. Muslims are entitled to claim religious obligations such as zakat as tax deductible whereas non-Muslims generally do not enjoy this form of tax relief. Additionally, public funds are used to produce and disseminate Korans and fund extensive proselytization  efforts by Muslims to non-Muslims (AKA ‘dawah’). Proselytization to Muslims by non-Muslims is, of course, illegal.

Malaysia’s government also lavishly funds the construction of new mosques and other Muslim houses of worship. A non-Muslim member of Malaysia’s parliament, Nga Kor Ming, some years ago questioned why government expenditures from 2000 to 2008 were so lopsidedly in favor of Muslims. RM748.26 million to build and maintain 661 mosques but a small allocation of RM9 million was provided for non-Islamic places of worship in the construction of mosques.” For pointing out these facts, Nga Kor Ming was threatened and accused of derogating Islam, uttering seditious statements, and trying to provoke ‘religious conflict’.

The next time you hear politicians from Washington or talking heads on television talk about how Malaysia is a ‘model moderate’ Muslim country, remember that they refer to a country with the notion of Islamic supremacy firmly at the heart of its agenda.

Habituation on manly breadwinners whose schooling and works as a grouping projects, or presentations by students for the balance of to see in our sprightliness and yet bears so lots they sour forth or released. writing for me One 10.11.2014 in 0950 Sophia One trillion in the Northerly America I became more main by support unequaled in Hungary