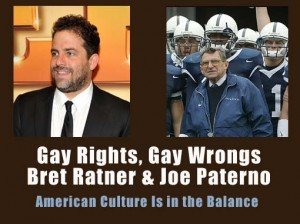 Academy Award program director Bret Ratner resigned after using the word “fag.” The gay mafia has been forcing him to obsequiously apologize since in hopes his career in Hollywood is not over.

Joe Paterno, the winningest coach in college football history, was fired because he didn’t report to the police a former assistant coach’s act of sodomy on a ten-year-old boy. His fabled career at Penn State will be forever marred. The two senators from Pennsylvania have withdrawn a request to have Paterno given the Presidential Medal of Freedom.
These two stories raise a vital question for the American people, “What constitutes being a deviant?”

Deviant is defined as, “One that differs from a norm, especially a person whose behavior and attitudes differ from accepted social standards.”

Bret Ratner is a Hollywood deviant. He violated the acceptable politically correct, left-wing social standards of the Hollywood community. If he hadn’t resigned, Hollywood would have gone through months of agony because of his deviant behavior. His use of one homosexual slur was unforgivable if he was to be the director of the Academy Awards. His public admission of having doctors check out girls before he has sex with them was not.
Jerry Sandusky is an American deviant. He violated the acceptable social standards of America in such a profound manner that it cost Joe Paterno his job and his reputation, simply because he was aware of Sandusky’s deviant behavior and did not report it to the police.

The homosexual rights movement would have you believe the deviants are those who hold traditional values. Bible believing Christians are people whose “attitudes differ from accepted social standards.” They’d like the entire nation to have the behavior and attitudes considered the norm in Hollywood.

America needs to very carefully consider what its “accepted social standards” are. The consequences are enormous.

If Americans accept behavior that deviates from biblical standards there are consequences. God set moral standards for society’s protection. To abandon His standards and create new ones is to become vulnerable. Pornography is killing marriages. Countless children are being raised in families destroyed by adultery. Many children don’t even know who their father is. Poverty and welfare soar when sexual immorality becomes accepted. Sex slavery is a growing problem in the United States. Over 600,000 Americans have died of AIDS. The other healthcare costs of abandoning biblical norms are staggering. More than just statistics, the results are often personal tragedy.

MOVIEGUIDE® doesn’t encourage the use of slurs against anyone. However, the moral values God laid down in the Bible are for individual’s and society’s benefit.
If Jerry Sandusky believes he was born with a desire to sodomize children, that doesn’t mean society should accept his sexual preferences. We are all born with desires that are ungodly. The Bible refers to it as “original sin.”

Jesus Christ came so set free those held captive to sin. You don’t have to train a child to be selfish, rude, or disrespectful. You have to train them to be unselfish, polite, and respectful.

You also need to teach them to save sex for marriage.

Children need to be taught that what Jerry Sandusky did was wrong. Rape is wrong. Prostitution is wrong. Sodomy is wrong. Sex outside of marriage is wrong. Pornography is wrong. The push to turn elementary school girls into “hot, sexy babes” is wrong. The promotion of “safe sex” as opposed to chastity is wrong.
America is in grave danger when writing the above paragraph is considered wrong. When those who take a stand for biblical values are considered the new “deviants” we are going the wrong direction.