Deepak Chopra and the Age-Old Problem with New Age Proselytizers

Physician and spiritual guru Deepak Chopra has the answers to all that ails you. As a resonant voice echoing through the mirrored, metaphysical halls of the New Age movement, Chopra believes that looking within to our inner gods and goddesses will release the divine life, which we all are capable of enjoying, from optimal health and happiness to transcendent peace and prosperity. 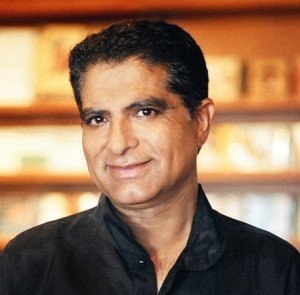 The problem lies in the inescapable fact that human beings are inherently sinful, hopelessly adrift, fundamentally foolish, and powerless, in our own strength, to reach even the remotest ring rippling from the epicenter of any ageless, amorphous universal energy from which, in Chopra’s view, all divinity flows.

not found in New Age mysticism, Transcendental Meditation, and Eastern medicine, nor is it sought after through the karmic concept of reincarnation. Only one answer exists, and it is reached not through works of the flesh, pursuits of the intellect, nor the unification of mind, body, and spirit, but through the simple, humble acceptance of a free gift of grace through Jesus Christ.

Chopra was first inspired to become a doctor while reading the Sinclair Lewis story, Arrowsmith, in high school. In his autobiography, Return of the Rishi, Chopra writes that the novel “had what I needed – the hero was a doctor and the doctor was a hero. At moments he was almost a god, bringing healing to skeptical mortals like an angelic doctor.”

Much like Lewis’s character, whom he greatly esteemed, Chopra has emerged as a godlike ambassador – an angelic doctor. With intelligence, eloquence, and sweet-sounding rhetoric appealing to the pathos of impressionable, unfortified minds, Chopra has made believers out of “skeptical mortals” by seemingly bridging the earthly impediments of man with the monistic network of a cosmic consciousness.

After years of smoking a pack a day and drinking whiskey to alleviate stress, Chopra was able to break his addictive habits through Transcendental Meditation (TM).

In 1985, Chopra met the founder and leader of TM, Maharishi Mahesh Yogi, who later invited Chopra to study Ayurveda, a system of medicine stemming from the Hindu religion.

Ayurveda is a Sanskrit word meaning “science of life” and focuses on balancing the flow of energy in the body. According to Chopra, “Ayurveda is very clear about the goal of life. It is to be happy and to receive wise and happy thoughts from every part of the universe.”

Maharishi Ayurveda, to which Chopra subscribes, emphasizes the role of Transcendental Meditation, as it pertains to happiness and good health. By repeating a mantra – a Hindu holy word – while meditating, it is believed that an individual can find God within his own being and receive “enlightenment.” To those who practice TM, this can be done because it is believed that God (Brahman) and the Self (Atman) are really one entity. Such a belief rejects and undermines the supremacy of Christ as the only human who was both fully God and fully man.

Chopra’s deep-seated conviction about the “goal of life,” while it may tickle man’s ears, does little to elucidate his purpose on earth. The meaning of life hangs solely on man’s relationship to the one, true God whom we are to fear and whose commandments we are to keep.

And relationship with God is only attained through a personal acceptance of his Son.

Also intrinsic to the “healing science” of Ayurveda is the concept of doshas. Chopra teaches that each individual possesses a mixture of these “energy types” which constitute our specific mental and physical characteristics.

Chopra writes in his book, Seven Spiritual Laws of Success, that mastering his Ayurvedic principles will “give you the ability to create unlimited wealth with effortless ease, and to experience success in every endeavor.”

This prideful philosophy on the acquisition of wealth wrongly attributes financial success to man’s ability to balance his doshas. We should remember that it is God who gives us the power to make wealth, not the realignment of our energies via the nirvana of meditation.

Chopra also maintains staunch anti-American beliefs, which he disseminates regularly on the Huffington Post. In an article posted in July of last year, Chopra lamented the fact that the U.S. is the last remaining superpower. “America leads the world in arms dealing, starting wars, and developing new methods of mechanized death.”

In his view, America should follow the words of John Lennon and “give peace a chance.”

In each of his verbose diatribes, Chopra neglects to mention the responsibilities and incidental bits and pieces that accompany the role of superpower.  “Peace is achieved by being peaceful,” he says.

Perhaps it is this sort of moral blindness and prosaic nostrums propagating peace and love against a practical, noble approach to relieving nations from totalitarian madness that has endeared Chopra to many in Hollywood. Not only does Chopra share Hollywood’s prevalent leftist political views, but he also advocates the quick and effortless accumulation of wealth. In fact, Chopra has made so much money off of his own CDs, books, and DVDs, that he has been dubbed, “McMeditation” for his seemingly endless supply of quick tips for obtaining fast food fulfillment. But swift fixes to perpetual problems cannot be acquired through the religious recitation of mantras or cathartic introspection.

God created us to be like him. Without him, therefore, it is impossible to have fulfillment. God loves “all who love me. Those who search for me will surely find me. Unending riches, honor, wealth, and justice are mine to distribute. My gifts are better than the purest gold, my wages better than sterling silver.”

Chopra and the followers of the New Age Movement do not acknowledge nor accept that the gifts God desires to bestow upon them are far more precious than any temporal possessions they could ever attain through eastern, pantheistic practices. God’s gifts for his children are eternal. The harsh elements of earth and the corrosive hands of time cannot destroy the everlasting treasures he provides.

Chopra’s main teaching is that the mind, body, and spirit are inseparable and interdependent. “Health is more than the absence of disease; it is a dynamic state of balance and integration of body, mind, and spirit.”

The New Testament diametrically opposes this viewpoint and teaches rather that the Spirit indwelling us and the body that houses it battle one another because our flesh must still contend with its old sin nature.

It is by daily walking with the Spirit of God that we successfully forgo the desires of the flesh and, instead, walk humbly in a manner worthy of our calling.

The theological concept of Karma, intrinsic to both the Buddhist and Hindu religions, is embraced by Chopra who summarizes it as, “what you sow is what you reap.” While his glib definition flickers slightly with the air of biblical congruence, his appropriation of the famous verse from the New Testament book of Galatians abandons the biblical precept of receiving awards for our actions in this present, transient life by teaching that our behavior determines into what sort of being and life we will be reincarnated when we die.

Reincarnation is fundamentally rejected in the Bible. Hebrews 9:27 states that everyone is destined to die once, and then face judgment. This single verse makes two points unequivocally clear. First, humans are only born and buried one time. The idea that life and death are part of an endless cycle of rebirths and new beginnings is absent throughout God’s Word. Second, the declaration that we face judgment after we die implies that there is no second chance, no second go ‘round to try and live a better life or be a nicer person.

Moreover, mankind could be reincarnated and pursue righteous acts for millennia and still fail to be counted worthy of entering heaven’s gates. Our righteousness is as “filthy rags” in the sight of God; we become His righteousness by accepting Christ.

Ephesians 2:8 states that we are saved by grace through faith, “not by works, so that no one can boast.”

Chopra believes that upon his death he will “enter a realm of pure consciousness…and at that moment I will be able to make the choices that I want about where I want to evolve and how I want to evolve as I make them now.”

In contrast to his Hindu-based teaching that reality is created from universal energy, the Bible tells us that only God can create ex nihilo [something from nothing].

Chopra holds that “in the end there’s nothing other than your personal self, your collective self, and your universal self…”

Sadly, Chopra has chosen to overlook and consequently reject the crucial significance of Jesus Christ’s death and resurrection, namely that it has provided eternal life for us, a life that is not mystically integrated into a quantum soup of universal consciousness but illuminated by the very presence of God and the perfect, just, and never-ending reign of His Son, with whom we are co-heirs.

Contrary to Chopra’s views of the afterlife, in the end, we will either enter into Paradise or torment.

For believers in Christ, we are to take great comfort in our eternal destiny. The Apostle Paul wrote to the Thessalonian church that Christians, unlike the “rest of men,” should have hope regarding loved ones who have died: “We believe that Jesus died and rose again and so we believe that God will bring with Jesus those who have fallen asleep in him.”

Jesus admonished His disciples to beware of false prophets “who come to you in sheep’s clothing, but inwardly they are ravenous wolves.  You will know them by their fruits.”

Deepak Chopra and other advocates of Cosmic Humanism and the New Age Movement have been deceived by the satanic subterfuge that energizes the theology of man’s “inner divinity” and ability to transcend into realms of higher consciousness. Though New Agers often try to disguise the pagan nature of their theories and ideologies by claiming practices such as Hindu yoga and meditation are neutral methods of relaxation and rejuvenation, it behooves believers to remember that Satan himself “masquerades as an angel of light,” and that behind the soft, serene, innocuous-looking façades of inner peace, ultimate happiness, and divine health lies a wolf.

Indeed, natural man cannot accept nor understand the things of the Spirit of God; they are foolishness to him unless he believes on Jesus Christ.

The New Age and each of its esoteric iterations crumble beneath the piercing perfection and irrefutable truths of the Bible. Contrary to the New Age Movement, man is not divine, but has been inherited a sin nature from which he must be saved.

The inerrant Word of God reveals the Almighty’s plan to redeem us from our fallen state of sin, corruption, and death by sending His Son as a perfect sacrifice to reconcile us unto Himself.

New Agers try to denounce Christianity as divisive and exclusionary, but this too is a diabolical lie. Praise God that the free gift of salvation is for everyone!