Good Imam/Bad Imam: How Muslims, President Obama and Their Supporters Are Deceiving America

The Muslim holy book, the Quran, tells Muslims it’s okay to lie about their faith to Non-Muslims to avoid “persecution,” but you can drive a 747 jumbo jet through that word “persecution” (see Sura 16:106 and 3:28 of the Quran).

In the last few days, Imam Feisel Abdul Rauf, the allegedly “moderate” Muslim behind the Ground Zero Mosque and Muslim “cultural” center in New York City, has told both CNN and ABC News that, if America doesn’t allow him and his Muslim supporters to build the mosque and cultural center, other Muslims around the world will “explode.”

“If we do move [the mosque],” Rauf said, “it will strengthen the argument of the [Muslim] radicals to recruit, their ability to recruit, and their increasing aggression and violence against our country.”

Apparently, President Barack Obama, who was raised as a Muslim by his stepfather in Islamofascist, Muslim-controlled Indonesia, agrees with Rauf’s assessment.

OBAMA IS AMERICA’S CRISIS (Part One)

Crisis is the dominant strategy of the Obama White House. Crisis is not only their basis for “change,” it is also a tool of distraction. While the American people are put in panic mode by the latest “emergency” or calamity by a seemingly wrought White House and media, crisis provides opportunity for Obama and cohorts to hurriedly implement their agendas. But, now as more and more Americans are paying attention, they are catching on.  They are discovering that at the root of America’s crisis is the very President himself. 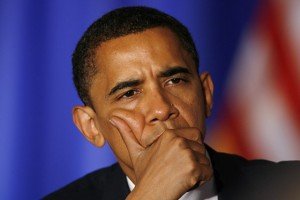 Early on complaints were, albeit legitimate ones, that Obama lacks business acumen. That he has neither business experience nor an education in economics. It soon became apparent to Americans that neither was needed.  One does not need business experience or education to bring down an economy or to inflict a deepening “economic crisis.” Business acumen is not needed to empty the U.S. treasury, trample free enterprise, hamstring small businesses with healthcare regulation and impending taxes, squeeze the middle class, increase unemployment/entitlement lines, raise taxes that will kill jobs, place a moratorium on oil production that kills jobs, regulate independent fishermen out of business, and, based on fraudulent global warming, push for a Cap and Trade/EPA regulated energy bill that will bust the budgets of households across America.  That is the making of a good crisis.  Obama’s White House Chief of Staff, Rahm Emanuel, is often quoted as never wanting a good “crisis to go to waste.”

Crisis in the making:  New